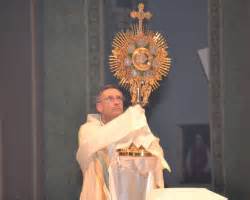 Tomorrow (Sunday 2 June) is the Feast of Corpus Christi. I've blogged before about the nature of the claim that bread and wine literally become the body and blood of Christ in transubstantiation, but I've recently discovered that Elizabeth Anscombe's essay on transubstantiation is available online. I remember reading this in her collected papers when I was an (atheist) undergraduate, and being terribly struck by it (although not quite overcoming the wonder that such a fine mind could be a Catholic. I mean, really!)

Anyway, it's full of fine things, particularly a Wittgensteinian sense that meaning is carried in practice as well as words, whilst not reducing transubstantiation simply to a sort of well-intentioned make believe:

When one says "transubstantiation" one is saying exactly what one teaches the child, in teaching it that Christ's words, by the divine power given to the priest who uses them in his place, have changed the bread so that it isn't there any more (nor the stuff of which it was made) but instead there is the body of Christ. The little child can grasp this and it is implicit in the act of worship that follows the teaching. I knew a child, close upon three years old and only then beginning to talk, but taught as I have described, who was in the free space at the back of the church when the mother went to communion. "Is he in you?" the child asked when the mother came back. "Yes," she said, and to her amazement the child prostrated itself before her. I can testify to this, for I saw it happen. I once told the story to one of those theologians who unhappily (as it seems) strive to alter and water down our faith, and he deplored it: he wished to say, and hoped that the Vatican Council would say, something that would show the child's idea to be wrong. I guessed then that the poor wretch was losing the faith and indeed so, sadly, did it turn out.

It is appropriate on the feast of Justin Martyr, who perhaps more than any other figure in the early Church symbolizes that marriage of reason and revelation that is true Christianity, to recall Anscombe's closing words on the eucharistic mystery:

It is the mystery of the faith which is the same for the simple and the learned. For they believe the same, and what is grasped by the simple is not better understood by the learned: their service is to clear away the rubbish which the human reason so often throws in the way to create obstacles.