Protect the Pope and Catholic media 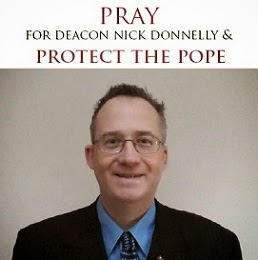 You'll have noticed that I have placed the above image in my sidebar as a gesture of support for Deacon Nick. (The image was created by The Bones who is encouraging other bloggers to use it.)

I don't want to spend too much time directly addressing Deacon Nick's position. I make absolutely no criticism of Bishop Campbell: I do not know the details of the situation and I think it entirely proper that a bishop takes a pastoral interest in the blogging activities of his clergy. I simply want to express my support for a blogger who has worked extremely hard over the years to create a lively news source for orthodox Catholics, and to express my hope that he will return in the near future to his blog.

I do want to make a wider point about Catholic blogging and general engagement with the media. One of the features of modernity (or post-modernity if you feel happier with that) is the omnipresence of chatter. This applies not only to the commanding heights of media such as the BBC, but also to online media. One religious impulse is simply to regard this as distraction to be solved by withdrawal. And, of course, there is something in this: much time is wasted in simple linguistic noise. A related impulse -characteristic of much official Catholic engagement with the media- is to intervene only in controlled, putatively dignified ways: the extraordinarily bland officialese of press releases etc. Again, whilst perfectly understandable, this does leave the Church sounding rather like a confection of the Queen, your senile Uncle in the corner rambling on about his adventures during the last War, and a Party Political Broadcast.

If neither of these solutions is adopted, then what would full engagement with the media look like? Much modern media prizes spontaneity and authenticity. One of the reasons for Pope Francis' attractiveness is that he does seem to embody these qualities. As far as the commanding heights of the media are concerned, often the Church needs spokespeople who manage to combine orthodoxy with looking and sounding like a 'normal' person. In online media such as blogs, as well as personality, we need numbers: unless there are lots of Catholics out there, talking about themselves and their beliefs in a way that expresses their own character, Catholicism will simply be crowded out and invisible.

All of this suggests to me that there is a real tension in media engagement between control (and the assurance of orthodoxy) and the sort of numbers and type of interaction needed for success which make control very difficult. The tempting solution is withdrawal: if it's difficult to get it right, then better to say nothing at all. But that way lies yet a further stage in a long journey into silence and invisibility.

If that's right, then Catholics -lay and ordained- better get used to a very messy public witness. There will be disagreements and there will be divergent voices. To ensure that orthodoxy emerges from those rather troubled waters is less a matter of silencing or coming down hard on the (inevitable) odd failure of tone or even content in this or that commentator, but ensuring that reliable (official) sources are available where the interested can get absolutely reliable information. In essence, the publication of the Catechism and the abolition of the Index symbolize this twofold solution: an abandonment of the attempt to control and ban, but the making available of a reliable standard.