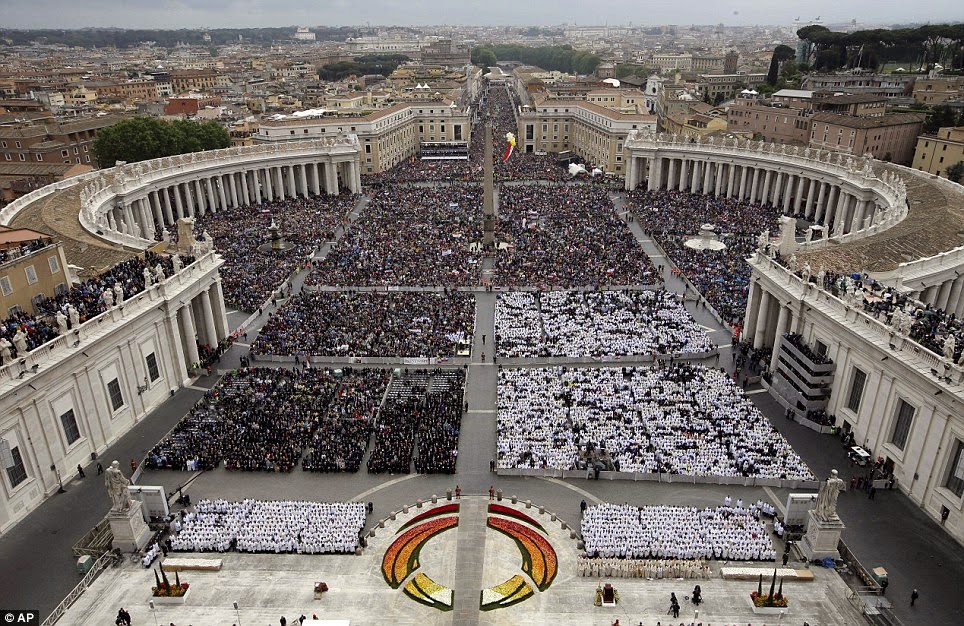 Chesterton in Orthodoxy talks about the child's delight in tinsel and glitter and how this natural delight carries over to Catholicism and, in particular, to its liturgy and art. (Well, I think he does. But I've had a quick look and can't find the passage I remembered. Perhaps this is one of the many things people ought to have written.)

Frankly, most of the weekend was rather a drag: too many things done which I'd rather not have done; too many things done badly. And I've compounded the gloomy feeling which has remained on Monday morning by having a quick look at twitter and staring into that particular abyss which the World's view of serious Catholicism and its defenders. But despite all that, part of me -a rather unreasonably large part of me- feels as cheerful as possible after Sunday's canonizations.

I'm not going to try to rationalize it. It's just a sheer human delight in seeing lots of people in a good mood celebrating good things. There's something magical in seeing around a million people gathered to celebrate a uniquely Catholic occasion.

At this level, all the New Atheist sneers about 'sky fairies' have a point. Being a Catholic at times is like living in a fairy tale. Except, it's a fairy tale where a billion people live and worship in a two thousand year old institution, which in the twenty first century can attract one million people to a square framed by the glories of Renaissance architecture. (And has dancing Polish nuns. I didn't see any, but I'm sure it would have had dancing Polish nuns.) It's the paradox of a real fairy tale.

So, Nay Sayers of every kidney,  away with you for at least one day! It's a feeling of joy for which I claim absolutely no evidential value. But it's the inheritance of every Catholic in this season of Easter and I'm going to enjoy it.