Is the Catholic Church in Scotland too Nationalist? 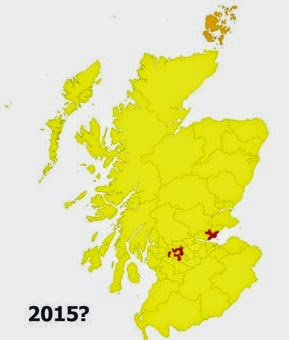 The above is a map of how (based on recent opinion polls) Scottish constituencies are projected to vote in the next Westminster election. (To spell it out, bright yellow is the SNP.) I couldn't help thinking about the map when reading Damian Thompson's Spectator piece entitled Memo to the Scottish Catholic bishops: stop sucking up to the SNP. (Here.)

I rather like Thompson's journalism. Like most journalists in this post modern age, he is paid to bring a bit of personality into the debate which inevitably produces both fizz and splutter over the years. But on the whole, and certainly if you're a certain sort of fogeyish, socially conservative Catholic, you're probably going to find more fizz than splutter in his work. However, on Scotland, Thompson, like most of the big beasts of Catholic opinion formation, strikes me as generally just hopelessly wrong. I think I've mentioned this before, but one of the (sadder? more amusing? depended on what mood I was in...) aspects of the referendum campaign was reading the constant stream of sneering about the Yes side in the referendum from Catholic opinion makers who really should have known better.

In one way, there's really no surprise, I suppose. The sort of people who tend to dominate the Catholic commentariate (at least the ones I read) are from (let's say) a rather conservative, traditionalist background. Put that together with a Golden Triangle (Oxford-Cambridge-London) background, and it's extremely difficult to sympathise with whingeing jocks voting for a bunch of popularist leftists. On the other hand, both localism and nationalism are popular themes among this set (in many ways, my set), and certainly that discontent with the political process represented by UKIP has received a favourable hearing. So from that point of view, I am a bit surprised at the lack of sympathy for or at least understanding of an independence movement that in many ways is just another example of a popular response to well known problems in modern Western Europe.

There's probably no one answer as to why the modern West and particularly its political process is in trouble. In part, it's probably the tension inherent in a system that is built on two  incompatible narratives: on the one hand, equality and subjectivism; on the other hand, a cult of meritocracy and technical expertise. And if you add to that the end of the economic good times, a culture prizing licence and leisure over self discipline and work, and the deliberate alienation of people from their human nature in favour of technological fantasies of self-creation and infinite possibility, you have in essence the creation of a free floating neurosis, a feeling that the times are out of joint, and the desperate seeking for release through something.

And so the parade of lightning rods, some more convincing than others: UKIP, Russell Brand, Le Front National etc etc. And, I suppose, among them, the SNP. So, to that extent, I agree with these commentators who seem to regard the movement for Scottish Independence as some sort of mental illness, to be treated rather than encountered as a natural part of the political landscape. Except....

And the 'except' is that the SNP are viable in a way that Russell Brand and even UKIP just are not. As the above map shows, it is likely that, after the next general election, the SNP will dominate Scottish seats in Westminster in a similar way to their domination of Holyrood. Moreover, Scots have got used to competent Holyrood administrations run by the SNP: if Salmond is some sort of wild eyed Braveheart fantasist, he is a wild eyed Braveheart fantasist who can run the country and win elections. (And no one has suggested that Nicola Sturgeon -like her or loathe her- is anything if not effective.)

I'm not sure when it happened, but some time since the re-foundation of the Scottish Parliament, my default setting for political interest has drifted from Westminster to Edinburgh. I don't regard either Salmond or Cameron as exactly 'my leader', but the political drama I look to first is that around Holyrood: indeed, it has started to become almost something of an afterthought to wonder what is happening at Westminster. I think it is that which is the biggest challenge to the Union: not so much the transfer of this or that power or even the precise result of this or that vote, but more the reframing of the electorate's interest in Scotland around Edinburgh rather than London. Now make of that what you will. It may be a fault to be regretted, a passing phase to be reversed. But I suspect -I'd in fact put it much more strongly than that- that I'm far from being alone in such a revisioning of the political settlement: in the minds of many Scots, Scotland is already a separate political landscape from that of Westminster and the rest of the UK.

And that is the context within which Archbishop Tartaglia's remarks should be taken. First, I'm not at all sure that, even in themselves they are that dreadful: Salmond has been a major figure in Scottish politics and his (sort of) passing deserves some sort of kind remark. (And Tartaglia's remarks on Sturgeon strike me as anodyne in the extreme.) Secondly, Tartaglia is but one bishop: you'd be hard put to find similar remarks from the much more careful Archbishop Cushley, let alone, say, Bishop Gilbert of Aberdeen. (And is it really a surprise that, within any Bishops' Conference, some will be closer to any particular party than others?) But thirdly, and most importantly, it is entirely reasonable that any bishop tries to find some modus vivendi with the government and leading political figures of the day. Inevitably, that balance is hard to get right: what is 'fawning' to some will appear merely formal politeness to others. That is what Thompson is missing: that Tartaglia is not sucking up to some relatively isolated charismatic popularist like Nigel Farage, but what has become almost the establishment in Scotland. (Would a similar jeremiad have been provoked if, say, a Catholic Bishop had spoken warmly of David Cameron after he resigned?)

I don't think the domination of Scotland by one party is healthy. I very much hope that Jim Murphy will restore the Labour Party to an effective opposition and a potential government. I also hope (though I see absolutely no realistic sign of this) that the Scottish Conservatives start providing a genuinely conservative alternative to a rampant progressivism, rather than trying to outdo the other parties in their endorsement of modish nonsense. But until all that happens, get used to the Catholic Church (and indeed other institutions such as universities and business) choosing their words carefully in the light of the reality of a Scotland where the SNP is the natural party of government. Scotland already is a separate and different political landscape, and until London commentators, Catholic or otherwise, get that, their pronouncements will continue to miss the mark.