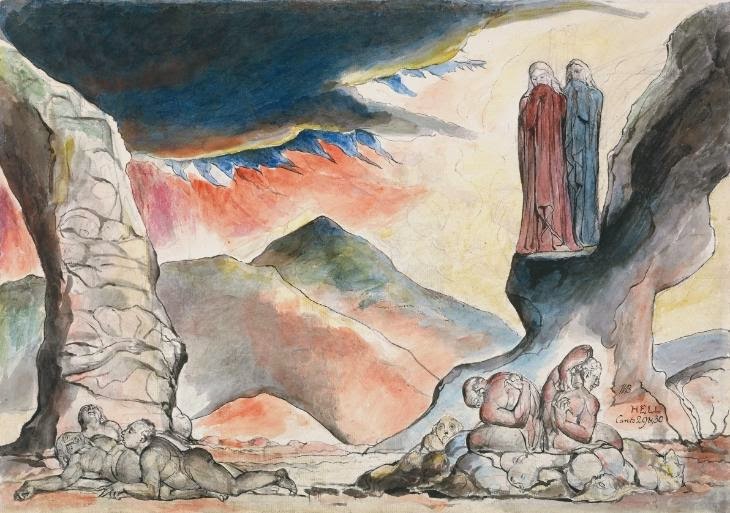 Dante enters the Pit of Disease where falsifiers are tormented.

I suppose any Scottish blogger's reflections on 2014 and 2015 are likely to be dominated by thoughts about the referendum and the future of the Independence movement in Scotland although I'd quite like them not to be. But there you are: I lack the imagination to find something else...

I like my politics grim and detailed. I remember as a child watching fascinated as the live relay of the TUC conference rambled on with a liturgical language of 'brothers and sisters' (or 'comrades' for variation) structured wave after wave of composite this or composite that. I watched it day after day. I'm surprised my parents didn't take me to a psychiatrist. So the loose, carnivality of modern progressive Nationalism leaves me cold. I wanted to know as much as possible about the price of oil and the likely effects on the economy. I wanted -good Aristotelian that I am- to be afraid of the things the practically wise man is afraid of, and blasé about those he is blasé about. I don't care much about intersectionality, except insofar as it pertains to Lego.

So we go into the New Year pretending. The 45 pretend that only the mentally ill and Quislings voted No. The attack dogs of Unionism pretend that Yes voters are all methadone crazed Neds. And beneath this obvious crust, further more local pretences. That marriage doesn't matter. (Except when changing its nature as some sort of Situationist prank.) That women and men are the same. That the second rate is the first rate and that Scottish media and artists are the latter. That education in Scotland gets better and better. That power dynamics and considerations of cost in the NHS will miraculously disappear when the State provides 'mercy' killing. And so on.

I think many sense this lie we live, the triumph of the Sophists and face. Truth in human affairs, perhaps above all in politics, is extremely difficult to attain, even to want to go on trying to attain:

Ideology is a specious way of relating to the world. It offers human beings the illusion of an identity, of dignity, and of morality while making it easier for them to part with them. As the repository of something suprapersonal and objective, it enables people to deceive their conscience and conceal their true position and their inglorious modus vivendi, both from the world and from ihemselves. It is a very pragmatic but, at the same time, an apparently dignified way of legitimizing what is above, below, and on either side. It is directed toward people and toward God. It is a veil behind which human beings can hide their own fallen existence, their trivialization, and their adaptation to the status quo. It is an excuse that everyone can use, from the greengrocer, who conceals his fear of losing his job behind an alleged interest in the unification of the workers of the world, to the highest functionary, whose interest in staying in power can be cloaked in phrases about service to the working class. The primary excusatory function of ideology, therefore, is to provide people, both as victims and pillars of the post-totalitarian system, with the illusion that the system is in harmony with the human order and the order of the universe. [Vaclav Havel: the Power of the Powerless here]

Havel's phrase the human order and the order of the universe has of course lost all meaning for us progressives, with its tones of essentialism and natural law. But it is only that, the sense that beneath the noise and the half truths and the jockeying for advantage, that there is an order to be discerned and followed in human affairs that will save us, as a society and as individuals.