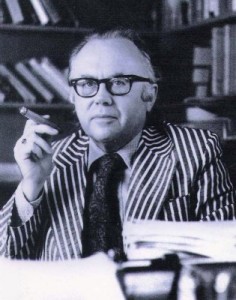 Wikipedia does a reasonable job of getting the basics right:

Reactions to Kirk seem to fall between idolatry from young men in five piece tweed suits and carrying what the suspicious might take to be a sword cane to having absolutely no idea who he is. (The latter I suspect is much the most common in Scotland.) So why do I think that it's worth taking him seriously everywhere but especially in Scotland? Here are some suggestions:

1. Suspicion of change.  The Scottish political scene is entirely dominated by self-styled 'progressives' including the Conservatives. (The Independent describing the Tory paper on tax reform:  "the word “progressive” features (a nod to mainstream political discourse in Scotland".) Whatever reality lies behind the narrative, the only game in town is one which talks of bright, shiny futures. The biggest lack in Scottish political discourse is anyone who is even talking along the following lines:

[T]he conservative adheres to custom, convention, and continuity. It is old custom that enables people to live together peaceably; the destroyers of custom demolish more than they know or desire. It is through convention—a word much abused in our time—that we contrive to avoid perpetual disputes about rights and duties: law at base is a body of conventions. Continuity is the means of linking generation to generation; it matters as much for society as it does for the individual; without it, life is meaningless. When successful revolutionaries have effaced old customs, derided old conventions, and broken the continuity of social institutions—why, presently they discover the necessity of establishing fresh customs, conventions, and continuity; but that process is painful and slow; and the new social order that eventually emerges may be much inferior to the old order that radicals overthrew in their zeal for the Earthly Paradise. [Here.]

2. An emphasis on imagination and 'seeing as' rather than party political success. If all of Scotland is now progressive, we are also all now gripped in a political culture where all that matters is effectiveness. The stream (trickle?) of voters away from Labour to the Conservatives is purely about the most effective opposition party to the SNP. Such calculations are of course inevitable.But unless there are the beginnings of a richer political culture with a greater variety of views and a willingness first to explore the nature of homo politicus before entering into the Machiavellian cut and thrust of day to day politics, Scottish public life will wither.

“Imagination rules the world,” Russell Kirk used to say. He meant that imagination is a force that molds the clay of our sentiments and understanding. It is not chiefly through calculations, formulas, and syllogisms, but by means of images, myths, and stories that we comprehend our relation to God, to nature, to others, and to the self. That is why William Wordsworth referred to the imagination as “The mightiest lever known to the moral world.” And that is why Dr. Johnson, in an earthier definition, quipped that imagination is “The thing which prevents [a man] from being as happy in the arms of a chambermaid as in the arms of a duchess.” [Here.]

3. Kirk loved Scotland (and Scott) and his sensibilities are in many ways much closer to Scottish culture than a Conservatism dominated by the London establishment. (At the very least, it is a relief to read a small town republican conservative rather than a scion of the Bullingdon Club.)

4. An emphasis on the transcendent. Although Kirk expresses this differently over the years, a sense of an order, rhythm or simple presence that stands outside the everyday world is a constant, expressing itself variously in his conversion to Catholicism in 1964, his writingof gothic ghost stories, and his Burkean sense of an organic unity of a tradition. This stands, I think, in contrast to both the mechanical Christianity of much of the modern Right in America and to the cynical pragmatism of much of the Right in Britain.

5. Finally, he is (as much as he presents) a 'patchwork' (to borrow Davila's phrase)  or (to borrow mine) a landscape of the mind. His affinities to post-modernism have been noted in that he created less a body of doctrine to be followed but a landscape to be inhabited. Moreover, it is a landscape that is in many ways highly individualistic: the landscape we inhabit in modernity is no longer a village that we can simply be born into, but one that has to be crafted by each of us as a bohemian:

I did not love cold harmony and perfect regu­larity of organization; what I sought was vari­ety, mystery, tradition, the venerable, the awful. I despised sophisters and calculators; I was groping for faith, honor, and prescriptive loyalties. I would have given any number of neo-classical pediments for one poor battered gargoyle. [Here.]