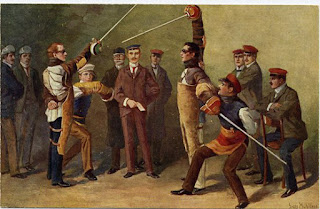 Perhaps not the best way of regulating disputes...

An article in the New York Times typified a lot of 'progressive' reaction to Trump's election. A Muslim student discovers her roommate -whom she seems to have got along with rather well before- voted Trump and therefore packs up and leaves:


We fought; I packed. This was Tuesday evening, so I headed to my friend’s dorm, where a small group of us, mainly black women, tried to find solace in one another as the country slowly fell to red. I tried and failed to speak, to write. I ignored my roommate’s lengthy texts.
Did she really expect me to respect her choice when her choice undermined my presence in this country, in this university, in my very own dorm room? Did she really expect me to shake her hand for supporting a candidate who would love to bar my relatives from this country, who has considered making people of my faith register in a specific database and carry special ID, Holocaust-style?
[Here]
What the article seems to miss (amongst many other things) is just how difficult it is for people to get along in a civilised manner: it requires virtue and often considerable will power. Certainly, part of this is putting up with other people's irritating personal habits: untidiness, singing off tune, slurping. But even more difficult is putting up with other people's views on important ethical matters. I am surrounded by people who often claim to see nothing wrong in killing unborn children, speak dismissively of God, and are positively foul about the Catholic Church. If I allowed my emotions free rein, I would be running around screaming at them. That I don't is a mix of different reasons. Sometimes it's because, short of ending up starving on the street, I have to get along with them. Sometimes it's because I have special duties to them as, for example, relatives. Sometimes, it's because, despite their views, I can see that they have a basic decency. And so on.
I'm not sure how much of this is due to social media, but this sort of recognition of the need for self control to establish civic peace and cordiality seems increasingly to be lost. Given the diversity of today's nation states, we all need to inculcate in ourselves and our children a much sterner self-discipline about knee jerk, emotional reactions. Getting on with other people involves compromise, self-restraint and courage. (I don't dismiss the student's fear of how she will be treated as a Muslim. But taking out that fear on a well-inclined, friendly roommate seems to me viciously self-indulgent.)
Self-restraint, civility, simple politeness. Not particularly fashionable virtues in a society where letting it all hang out and stuff anybody else has been the norm of behaviour from the sixties. And, yes, I am only too well aware of the difficulty in reconciling these norms with Donald Trump's behaviour. Doesn't make them any less necessary.
Posted by Lazarus at 08:48