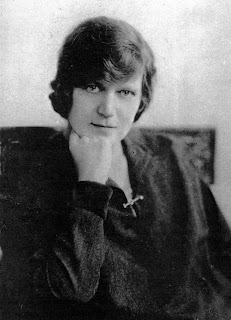 Whilst trying to wind up Twitter by praising the wisdom of the suffragists rather than the violence of the  suffragettes, I came across an interesting essay on Richmal Crompton (a suffragist):

This repetition [in her books] not only reveals the way in which a busy writer recycles her material. It also suggests that we should see Crompton's work as the expression of a consistent set of values. But what, in the end, are those values? For Owen Dudley Edwards, the Just William stories show Crompton as a Tory radical: a scourge of the establishment, an anti-snob. This is, however, only partially true. Crompton was certainly a Tory. A member of the Conservative Party from 1920 onwards, she described herself as 'true-blue'. She was also a shrewd critic of social convention and of the petty snobbery of English life. Her wiser characters are always those who come to realise 'that there is no vulgarity in an aspidistra, but there is a world of vulgarity in the conventional sneer at it'. Many of her stories likewise conclude with the recognition that 'There's only one vulgarity...and that's pretending to be something you aren't.' Nonetheless, Crompton's books as a whole reveal a rather more pessimistic sort of Conservatism than Dudley Edwards has discerned. It is not just that she had a very limited belief in the possibility of human progress -although she did, describing the passage of time as rather like a roundabout, with people going up and down but never really moving forward. Nor is it simply that she had a bleak view of the capacity of people to understand one another -although again, her description of humans as 'A set of children playing blind man's buff', unable truly to comprehend themselves or each other, suggests that this was a central aspect of her worldview. More importantly, Crompton's views on class and on human nature bear little resemblance to the crusade for 'fairness, and the consequent destruction of privilege' that Dudley Edwards sees in the wartime fiction.

This analysis, combining confidence in social stability with pessimism about the fundamental nature of humanity, is, of course, a classically High Tory one. It is also a High Anglican -indeed Augustinian- notion, and it comes as little surprise to learn that Crompton was an Anglo-Catholic...No one is entirely pure, no one is entirely good; indeed, 'unselfish people are sometimes much more selfish than selfish people'...True wisdom and real change, in Crompton's books, come from...an acceptance of God and his providence: his capacity to rectify the worst effects of human sin. Human efforts on their own will always fail...

[Her work] reveals a Conservative who was unthreatened by modernity. But this optimism was always tempered: first, by a rejection of social and political reform, and secondly by a highly pessimistic view of human nature.

This passage sent a lot of hares running in my mind: both personal (how much have I personally been affected by a childhood immersed in her books?) and political.  Sticking with the political, why is this humane, conservative view almost entirely unavailable to modern youth? I don't mean by that just the unfashionableness of her work (and I find it hard to judge how much such a claim would be true: certainly less fashionable than when I was young, but forgotten? I hope not) but rather the unavailability of such ideas as a current, half articulated worldview. Even when I was reading them, we were beginning that long, futile trek through the sixties into the modern progressive era, where humour, resignation, God and a realistic sense of possibility have been lost in favour of strident self assertion in the service of consumerism. And thus I don't think I noticed these conservative ideas: not until much later in my life when reading first Scruton, then Burke and finally Kirk, did I recognise the outline of a philosophically coherent, but culturally very, very unfashionable worldview. That's a pity, because at the least, such an Augustinian conservatism is at the very least a useful corrective to modern progressivism, and possible even just simply true.

I can hear my internal -and doubtless external- critic muttering at this point that such a politics is all very well if your position in life is quite comfortable, rather less so if you're at the bottom of the self-satisfied heap. Possibly. But (at least) three things in response. First, a personal response. My father grew up at the very bottom of the heap that Crompton describes in the sort of grinding industrial poverty that wouldn't be seen now outside the developing world (and the effects -and stories- of that world filled my childhood). Of course, that's not a philosophical answer, but is is an admission that I find assertions that only those who have never experienced wretchedness would find such a worldview plausible rather irritating when they come from those whose bloodlines trickle back to the Norman Conquest. Secondly, a realistic sense of what might be possible is essential when trying to doing something about genuine harms: tilting at a thousand and one imagined or minor harms is a good way of avoiding concentrating on what might really and imperfectly be done to remedy serious wretchedness in our society. Finally, Augustinian pessimism is primarily about valuing what really matters: there is no final solution to the problems of the earthly city, and the key thing is that such problems as there are do not get in the way of the pursuit of the heavenly city, either by distracting us by their constant noise, or by simply replacing that supernatural goal. And it is because of that final possibility that secularism destroys the possibility of a good political order: by ignoring the reality of a transcendent, supernatural order, it replaces the real possibility of achieving happiness with a constant, churning, unfulfillable desire for earthly perfection. (Which is why, demonstrably, as proved by SCIENCE, all secularists are in strict medical terms and by dint of ignoring realities nuts.)
Posted by Lazarus at 04:05