Review of Barbara Ehrenreich's 'Living with a Wild God' 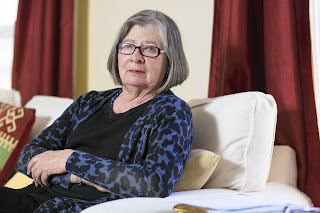 I bought Ehrenreich's Living with a Wild God a while back frankly because it was, at the time, on one of those cheap offers from Kindle. I put off reading it because I expected a rather dreary account of spirituality from a secularised liberal -and, at least in part, that's what it is.

Most of the book, however, is a relatively straightforward account of the adolescence of a very smart, but unhappy girl. That makes it sound rather banal and indeed it is. Ehrenreich's parents are, cutting through the fluff, opinionated and irresponsible drunks. Coupled with the social tensions unleashed on America in the fifties and sixties, this makes for a narrative that is rather comforting in its familiarity: they eff you up, your mom and pop, but you're smart enough to escape (sort of). That said, I enjoyed this part. Ehrenreich writes well (albeit in that seamless, overly perfect style of the MFA teacher/professional writer determined to leave nothing thought unwritten or unsold). It works well as a coming of age narrative, and that was rather a relief after what I thought I was going to get.

But God does get a part, although rather a bit part compared to Barbara Ehrenreich's. His first walk on appearance is in her teenage years where, apparently prompted by lack of sleep and a stressful long drive, she has a vision of the world denuded of human meaning. (A bit like Sartre's  Nausea but without the nausea.) His second appearance is in late middle age where, having moved to the wilds of Florida, she starts to appreciate the extreme Otherness of wild creatures, particularly the dangerous ones. What appears to connect the two is a sense of an Otherness in the universe beyond Ehrenreich's adolescent solipsism: not exactly a God, but the hint of other entities or forces that are at least analogous to intelligences. (Another step in this process -and perhaps another walk on part for the deity- is in her recognition in her twenties of the real existence of other human minds in her increasing sense of social injustice and individual suffering which leads to a life of progressive activism.)

I can think of many worse ways of spending a few hours than reading this book. It offers the satisfaction both of a well written Bildungsroman and an insight into at least a version of the modern 'spirituality not religion' secularised mindset. What irritated me about it was that, despite the title, the God encountered is so very domesticated, so very Ehreneiched. Partly this is a result of the overcrafted style: every experience has been digested and transformed into well-formed, tasteful prose. But more important is the substantive expectedness of the Other encountered. Perhaps if you're a materialist and chemical biologist by training, it seems very daring, very wild to think of anything beyond molecules and gravity and exceptionless laws of nature. So when you find yourself talking like this, it's impossible to think of yourself as anything other than the edgiest kid on the block:

We have, in other words, made ourselves far lonelier than we have any reason to be. My adolescent solipsism is incidental compared to the collective solipsism our species has embraced for the last few centuries in the name of modernity and rationality, a worldview in which there exists no consciousness or agency other than our own, where nonhuman animals are dumb mechanisms, driven by instinct, where all other deities and spirits have been eliminated in favor of the unapproachable God of monotheism...


You first have to revise the question. To ask why is to ask  for a motive or a purpose, and a motive has to arise from an apparatus capable of framing an intention, which is what we normally call a mind. Thus the question why is always really the question who.

Since we have long since outgrown the easy answer -God- along with theism of any kind, we have to look for our who within what actually exists. No one is saying that the universe, as an entity, is alive, and certainly not that it has motives or desires. But the closer and more carefully we probe, the more it seethes with what looks like life...


(From the final chapter.)


A mystery recognised, but then immediately reduced to something untroubling (not theism, not monotheism, not even polytheism) and frankly rather babbling in the way that a peasant might babble that the world was made out of rotting cheese. And who again is this 'us'? Who beyond the select circle of Enlighted Democrats would be surprised to discover that animals have desires and mental content, at least at the level of sometimes wanting to eat 'us'? Would Catholics be surprised at a world filled with saints, angels and demons? Would classical theists be content with the sort of Nobodaddy that Ehrenreich imagines and rejects rather than the 'what we call God' of the Quinque Viae? And never mind anything about Romanticism, or Spinoza or Schopenhauer: just Ehrenreich. A bit surprised because she and her circle are a bit surprised, but not too much surprised because the Other isn't really anything more than 'algorithms' but apparently ones with an 'unquenchable playfulness' (final chapter again) however that is supposed to work.

I have a tendency to snark and it's probably not helping here. But there's almost no indication that, it having occurred to her that the world is infested with non-human mind, she then does the obvious thing of looking carefully at what previous human minds have said about that (quickly flipping through the Upanishads as a fifteen year old doesn't count) or at least acknowledging that others have said an awful lot on this which she simply hasn't grappled with. Instead the purported wildness of this discovery becomes simply a trophy to be displayed on her cultural wall. Not only, she seems to say, do I inhabit this comfortable apartment with all modern amenities, but I am also superior to you because I acknowledge the Wild. And there it is, decapitated, labelled, and hung over my woodburning stove.

(For another view, The Guardian review is here.)