Cardinal O'Brien, referendums and the family 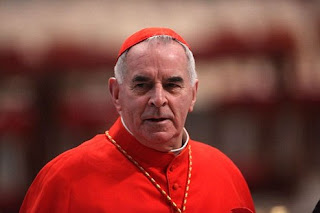 On the eve of the Scottish Government cabinet meeting (widely predicted to introduce legislation for same sex 'marriage') Cardinal O'Brien has been arguing for the use of a referendum to decide the question:


Cardinal O’Brien suggested that a referendum on same-sex marriage was as legitimate as the 2014 vote on Scottish independence, as he issued the statement pitched directly to ministers attending the meeting. He highlighted the fact that the same-sex marriage consultation received almost 80,000 responses – three times more than the SNP’s government’s consultation on the independence referendum.

He said: “There has been much debate in Scotland about the referendum on independence. The proposed referendum is crucially important.

“Clearly, if it is sensible to hold a referendum on independence, it is crucial that we have one on marriage. It is the only way the country can move forward on this issue.

Putting aside the substance of the issue of same sex 'marriage' (on which regular readers have probably had more than a bellyful of my views), I suspect that many non-Catholic (and perhaps Catholic) readers will have trouble regarding the demand for a referendum as anything more than a political tactic to reject or at least delay the introduction of a simple piece of reform. Perhaps.

But beyond this is the political and philosophical tradition of Thomism that sees the family as one of the fundamental building blocks of the state. This goes back to Aristotle's analysis in The Politics:

He who thus considers things in their first growth and origin, whether a state or anything else, will obtain the clearest view of them. In the first place there must be a union of those who cannot exist without each other; namely, of male and female, that the race may continue (and this is a union which is formed, not of deliberate purpose, but because, in common with other animals and with plants, mankind have a natural desire to leave behind them an image of themselves), and of natural ruler and subject, that both may be preserved.

As Aquinas explains the centrality of family and state in his Commentary on the Politics:

This philosophical tradition is carried through to the modern Church in, for example, the Compendium of Social  Doctrine (s.214):

The priority of the family over society and over the State must be affirmed. The family in fact, at least in its procreative function, is the condition itself for their existence. With regard to other functions that benefit each of its members, it proceeds in importance and value the functions that society and the State are called to perform[471]. The family possesses inviolable rights and finds its legitimization in human nature and not in being recognized by the State. The family, then, does not exist for society or the State, but society and the State exist for the family.