Was the Scottish Reformation a good thing? 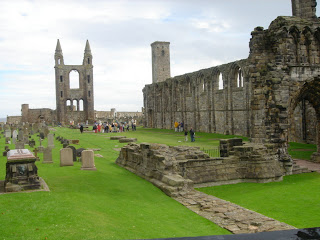 
Off on travels for a while to avoid CIA-World Government Peter Tatchell look alike killer robots -so apologies for any infrequent comment moderation and posting.


Anyway, although, as a carpet chewing Catholic nutter, I wouldn't be expected to approve of the Reformation, this post is intended as a genuine question rather than a foregone conclusion.

One of the main changes I've been aware of in English historiography is the growth of a widespread acknowledgement, both in academic and interested amateur circles, that there is more to be said about the English Reformation than gushing praise at how the domination of the Whore of Babylon was peacefully removed by good old bluff King Hal. I'm sure part of this is the result of (eg) the popular appreciation of St Thomas More brought about by the play/film, A Man for all Seasons and a general growing suspicion that King Henry VIII wasn't a jolly nice chap after all. More importantly, it is a result of the works of historians like Eamon Duffy's Stripping of the Altars which paint the picture of a popular, vibrant Catholicism, overthrown by the actions of government rather than the people. Now, I think that revisionist picture has gone quite deep into the consciousness of English Catholic intellectuals and given them a confidence and an interest in the place of Catholicism in English history that, absent such an understanding of the Reformation as an imposition, would be hard to sustain. All in all, it makes it easier to be English, Catholic and a traditionalist.

And what of Scotland? It's been nagging at me for a while now that, despite all the reading of Duffy's works that I've done and my consequent understanding of (at least one interpretation of) English Reformation History, I've come across little that's similar in Scotland. I have absolutely no doubt that, if you asked reasonably well educated but nonexpert Scots about the Reformation, you'd get the familiar Whig story of how it was all an excellent part of the triumph of good sense and freedom against the wicked Roman Church.    So is that the dominant academic view and, perhaps more importantly, to the extent any revisionist views exist in academe, how far have these leaked out into the wider world, Catholic and non-Catholic?

Michael Lynch has produced an overview of the nature of the Scottish Reformation which concludes that it was imposed from above. But it says little about the state and popularity of the Church which was supplanted. Moreover, whatever the academic state of play, I'm pretty sure that no work of revision has penetrated Scottish Catholic consciousness to the same degree as those of Duffy.

Now there might be many reasons for this. Certainly one is the comparative smallness of Scottish cultural life: just because we are a smaller country, the (inevitably) fewer people who are interested in such things are less likely to be able to sustain revisionist, semi-popular historiography such as Duffy's. Moreover, to the extent that the non-Catholic population are interested in the Reformation, the Presbyterian mind set of the Kirk is much less likely to welcome revisionist history than the semi-Catholicized Anglicanism of the Church of England. Moreover, within the Catholic Church, there is probably still more of a lingering sense of our being (mainly Irish) outsiders than there is in England: is Scottish religious history really our religious history?

Anyway, not sure about much of the explanation of this. Perhaps the Scottish Reformation was, despite Lynch, really a bottom up popular revolt against Papal impositions. (If it were, it would still have been wrong: it wouldn't be the first time that a popular revolution was misguided.) But I suspect that an unfortunate side effect of this lack of a Catholic revisionist understanding of the Reformation is an increased difficulty within the Scottish Church in embracing traditionalism: finding/making oneself at home in a place or practice because one sees it as part of a historical continuity.

One of the ways in which life is enriched by religion is through the imaginative re-enchantment of the environment: this is the place where so-and-so died for her faith; this is the place where pilgrims for centuries came to venerate the St X. Of course, Scottish Catholics already do some of this -and one can think of writers such as George Mackay Brown who have done rather a lot of it- but my impression is that we do rather less of it than English and Irish and Welsh Catholics. And a major block on such an imaginative re-enchantment is the alienation produced by the sense of the Reformation as a decisive popular rejection of Rome. Duffy has done much to undermine a similar block in England. Any takers for a similar undertaking in Scotland?