Fourth of July, the education of the Founding Fathers and scholasticism 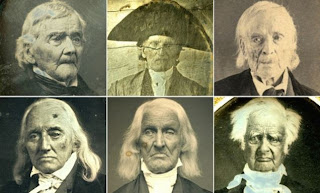 Oh, you must have done it... You're busy. Things happen. And then you come home to find a glowering spouse sulking because you've forgotten an anniversary.

This, of course, does not refer to Mrs L, who continues to bask in the finest attentive care that I can provide, but to the 4th of July which I forgot. Sorry to all of you in the US! Yesterday really was busy.

Anyway, in celebration of your anniversary I provide, first, the above photo of veterans of the Revolutionary War. The rather striking images are taken from daguerreotypes of survivors who were still around in the 1840s. Full article here.

Perhaps more importantly, it gives me an opportunity to bash on again about the benefits of scholasticism as a philosophical and educational system. I recently read Education of the Founding Fathers of the Republic: Scholasticism in the Colonial Colleges by James J. Walsh, (Fordham University Press, 1935), free online version available here. Walsh's book is not, in itself, exactly a good read: it has one theme and it bangs on about it in relentless detail. However, that theme is a fascinating one:


Scholasticism, the philosophy of the Schoolmen and of the medieval universities, the group of subjects which occupied most of the attention of European university students for a thousand years or more, is usually thought to have gone out of vogue at the end of the Middle Ages or to have disappeared with the New Learning at the Reformation. That almost universal impression is entirely mistaken. The proof of the serious fallacy that has gained acceptance in this matter is to be found in the easily ascertainable fact that Scholasticism continued to be the philosophic teaching of European but also American universities and colleges down until well on in the nineteenth century.

The evidence for this is abundant and convincing in the archives of our colonial colleges. A set of very precious official documents attest it. On Commencement day the candidates for the degree of B.A. were required in all the colleges of this country in the seventeenth and eighteenth centuries to defend a series of propositions, about one hundred more or less, that were printed at the expense of the students and were distributed to such of the audience as cared to take part in the public disputation which was held, as Cotton Mather tells us, on Commencement morning. These propositions summarized the studies in philosophy which represented the principal occupation of the students during the last two years of their college course, and for a considerable portion of the preceding two years.

This fact which is manifest at once and is quite indisputable when our American colonial college theses are studied especially in connection with the college regulations as regards the holding of disputations regularly every week, is the most surprising revelation that we have had in the history of American education for several generations. It seems quite impossible to the great majority of our educators that Scholasticism should have continued to maintain its foothold in European and American colleges down to the beginning of the nineteenth
century. Scholasticism has always been looked upon as a thing of the distant past, but as a matter of fact the men who organized our government of the people, by the people and for the people in its present form, were most of them trained mentally in accordance with this medieval mode of thought and teaching.

The Founding Fathers of our republic, then, were educated according to the academic traditions which had been formulated in the earlier Middle Ages by Boethius, sometimes hailed as the father of Scholasticism, developed under St. Anselm in the eleventh century, reaching their culmination in the mind of Aquinas and the group contemporary with him in
the thirteenth century when there came the conciliation of Scholastic doctrines with Aristotle, thus welding together the whole course of philosophic thought.

Walsh rather underplays the fact that he is dealing with a Protestant scholasticism, one that (to a Catholic eye at least) is less firmly rooted in Aristotle and philosophic reasoning about human nature and more based on a foundation of axiomatic truths derived from revelation. (The general history of Protestant scholasticism, particularly in ethics, and a positive re-evaluation of its worth can be found here.)  As a standard work on ethics of this kind (quoted in Walsh, p.198) had it:


As we are reasonable creatures and obliged as such to yield unto God, the author of our
beings, a reasonable service, it may be of very good use for us as far as it will go, with an implicit submission to Him for the rest, to exercise our reason upon these great and important subjects...As our reason in these things is, at best, but very dark and weak it is of the greatest importance to us that we diligently study the holy oracles in which we have the sublimest and most advantageous instructions and incentives to practice with regard to these matters
which are of the utmost importance to our true and everlasting happiness.


The book goes through the curricula of various of the early American colleges. At the end, it's quite clear that the Founding Fathers of the US were schooled in a rigorously structured and reasoned system of ethics, explicitly based on the assumption of the relevance of divine guidance and revelation in Christianity, and regularly applied to the burning issues of the day such as revolution against an unjust government (generally in favour) and the existence of slavery (generally against). That's probably not surprising to anyone who's familiar with (eg) the Scottish universities of the time, but it's worth repeating in an age where there is a myth of the Enlightenment as simply a revolt against religion rather than in many ways a movement within Christianity. And it's also a useful reminder in what we've lost by abandoning a system of Higher Education that was truly systematic, and which was oriented towards producing a thoughtful and reflective citizenry, aware of its duties towards God and fellow human beings:


My duty and happiness must in general consist in the union of my will with His; in sincerely choosing what He chooseth and delighting in whatsoever He delights in ; in submitting to whatever instructions He shall think fit to give or whatever laws He shall think fit to enjoin either by nature or revelation ; and in resigning to the whole system of constitution which He hath established both natural and moral; and consequently in patiently bearing whatever He is pleased to allot and in conducting toward every person and thing as being what it really is and what He hath made it as He Himself 'doth and in governing myself and my whole temper
and behavior by all those rules which promote the general weal of the whole system as God doth Himself ; always avoiding what is wrong or hurtful as being contrary thereunto; and doing what is right or beneficial as being agreeable to it on all occasions as they offer.


Readers on both sides of the Atlantic may pause and weep at what we have lost.
Posted by Lazarus at 05:42