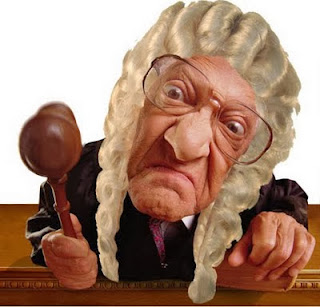 The Judge in the Hampstead Coffee Shop....


Although I'd been vaguely aware of Sir James Munby's ruminations (PDF here) on the law and religion, I'd filed it mentally under the heading 'another sign of things falling apart' without giving it much attention until the Law and Religion blog got its teeth stuck into it. That blog gives it quite a respectful hearing. I'm afraid my reaction is rather different.

My overall impression of Sir James' speech is frankly disbelief that a senior legal figure should come up with something quite so superficial. I might hope it's simply rubber chicken syndrome: like many of those in the great world, he finds himself yet again invited to one of those annoying dinners where the price of entry is getting up on your hind legs and speaking; he puts something together at the last moment, utters forth to the accompaniment of soothing noises from rhubarbing middle aged men; and then settles down to wrestling with an indifferent fowl bathed in some sort of gloop. It's only a speech, you  might suspect he would say if challenged...

I fear however since it is dubbed 'a keynote address' that it must be held to rather higher standards. Much of his argument centres on the disputes between John Stuart Mill and James Fitzjames Stephen in the nineteenth century,  and Hart and Patrick Devlin in the twentieth. Both have taken on the status of symbolic struggles between a broadly libertarian view of the law as promoting the maximum amount of negative liberty subject only to the avoidance of harm (Mill and Hart) versus a view of the law as embodying substantive moral content (Stephen and Devlin). (A very brief summary of the key issues is given here.)

Now oddly enough, I'm rather on the side of Mill and Hart in this. Given the nature of our society, I'd rather have the legal protection to carry on (in Mill's terms) my experiments in living, rather than having government or other agents stepping in to curtail my negative liberty. Do I think that's an ideal state? No, but it's better than one where I -as a member of a minority (Catholic) group- am subject to state coercion to restrict or change my views or behaviour. Mill bases his view on the great importance of liberty; living your life according to your own lights is, for Mill, the central aspect of long term human happiness which he, as a utilitarian, is intent on promoting.

This rather grand and bracing vision of human nature is completely ignored by Munby who turns a debate centred on liberty into a debate centred on religion. There is little in Munby's speech about the importance of autonomy, free speech and experiments in living. Instead, we have:

Now, according to Mill and Hart, the simple answer to this would be no: the judicial task is to make sure that I have as much negative liberty as possible subject to the harm principle:

The only purpose for which power can be rightfully exercised over any member of a civilized community, against his will, is to prevent harm to others.

On the other hand, 'the standards of reasonable men and women in 2013' reads as though Munby is channelling Devlin:

How is the law-maker to ascertain the moral judgment of society?...English law has evolved and regularly uses a standard which does not depend on the counting of heads. It is that of the reasonable man. He is not to be confused with the rational man. He is not expected to reason about anything and his judgment may be largely a matter of feeling. It is the viewpoint of the man in the street -or to use an archaism familiar to lawyers -the man in the Clapham omnibus. (Devlin: The Enforcement of Morals.)

It is this blindness to the real nature of the Mill/Hart and Stephen/Devlin dispute that is most worrying about Munby. It is one thing to note that we live in an extremely fragmented society where there is no real shared substantive view of the good. For such a society, there is much to be said for Mill's view of maximizing personal liberty, the negative liberty of freedom from interference, particularly by government. In the sort of recent 'hot button' cases concerning religion, that would mean that religious minorities would have a strong presumption in favour of their right to act as they like unless clear and direct harm was being caused to others. (So B&B owners would be almost certainly be able to discriminate against unmarried couples and registrars would be able to negotiate exemptions from carrying out same sex 'marriages' etc.) It is quite another thing to suggest that, now the man on the Clapham omnibus has changed his views, we should be imposing a religion-free morality in the same way that Devlin and Stephen would have imposed a religious morality.

Of course, there may well be arguments in favour of such a Devlin-like position: Frank at Law and Religion seems to endorse Lord Justice Laws' view which is that

the conferment of any legal protection or preference upon a particular substantive moral position on the ground only that it is espoused by the adherents of a particular faith, however long its tradition, however rich its culture, is deeply unprincipled. It imposes compulsory law, not to advance the general good on objective grounds, but to give effect to the force of subjective opinion. This must be so, since in the eye of everyone save the believer religious faith is necessarily subjective, being incommunicable by any kind of proof or evidence. It may of course be true; but the ascertainment of such a truth lies beyond the means by which laws are made in a reasonable society. Therefore it lies only in the heart of the believer, who is alone bound by it. No one else is or can be so bound, unless by his own free choice he accepts its claims.

In essence, the claim is that morality based on religion is subjective and the law deals only with objective morality. Frankly, this is utter tosh. The philosophical debates in this area ought to be well known, but, in short, the taking of such a view would have to respond (at least) to Macintyre's analysis of all moral thinking as taking place within a particular tradition, and the Catholic understanding of reasoning about our nature and its flourishing taking place within an Aristotelian conception of ethics rather than one based on faith. There's absolutely no sign that either Laws or Munby have even started to grapple with such considerations.

In fine, we are left with the irony that Munby is defending a position like Devlin's whilst under the apparent impression that he is supporting Mill and Hart. (It is merely that the test is now the judge in the Hampstead Coffee Shop rather than the man on the Clapham Omnibus.) If one assumes that there is one commonsense moral opinion that can, in rough terms, be discerned by the mind of the passenger on the omnibus, then the imposition of that view may be possible, even if it leaves open the further question as to whether that view (and its enforcement) is actually morally good. But the deeper challenge of post modernity -or, perhaps more narrowly, the challenge of a society that no longer coheres around a particular institutionalized worldview (such as that of the Church of England or Church of Scotland) is that there is no longer such a single worldview. There is no such thing as one secular worldview that remains after religion is subtracted.

The unnoticed confusions in the speech over the relationship between Mill's views and James' championing of a Devlin like test based on a social coherence which no longer exists suggests two conclusions. Either our great and good are too dumb to understand what they are arguing; or they know quite well what they are saying and are simply covering up their real intentions under a smog of verbiage. We can immediately reject the first possibility as too bizarre to be worth considering. I am therefore going with the assumption that our country is being run by giant alien lizards who are engaged in a worldwide conspiracy to impose secular (ie Gorn) standards on us.

You read it here first...