Marriage and the Family Consultation and Gerry Hassan 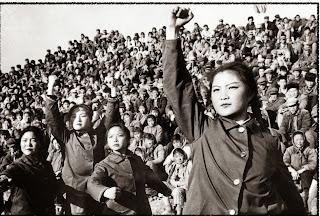 Members of the Parish discussing Marriage and the Family


As noted on previous occasions, I quite like much of the sound of Gerry Hassan, but the nasty, sceptical intellectual who lives within keeps wanting to ask for some more details before we crown him 'Scotland's main public intellectual'...

In a recent piece, he returns to his one (only?) theme: the need for a re-envisioning of Scottish politics and the need for a deeper, different conversation about the nature of society:

Somehow we need to nurture a mature, democratic conversation about work, class and the lives, identities and memories we shape around it. The conservatism of British trade unionism even at its peak was a product of the capitalism it opposed, while the limits of management and capital were glossed over but magnified in the Thatcher and Blair eras.[Full article, here.]

Well, fair enough. But the devil is undoubtedly in the details. What sort of conversation? What sort of structures? How to move from a conversation (which, essentially, is reflective rather than directed to action) to deliberation prior to decision? It's hard to get away from a suspicion that the sort of conversation that is likely to ensue would be rather akin to those meetings of the Red Guard where the rhetoric of popular control is foregrounded, just so long as it follows the lines laid down by the Gang of Four/Progressive journalists.

Unless you dig down into how concretely deliberation and conversation is constructed in specific situations, you are, I suspect, simply doomed to reproduce existing patterns of power, or, at most, simply to shift the pieces a little, so that a quite powerful faction becomes a very powerful faction, or the most powerful faction gets demoted to a merely extremely powerful faction: if people ain't already talking,  they have to be led to talk, and those leading them are inevitably those with a certain amount of existing control. 'Ever the pessimist, dear Lazarus?' Well, not necessarily. But I'd like details of how in specific cases, such a general tendency is going to be avoided.

So let's take a real, not imagined, consultation/conversation/survey: the current 'Marriage and Family Consultation' out of the Vatican. (Hassan ought to be interested in this as he noted that: A radical left would talk about power and the strange lack of curiosity that Scots seem to have about who holds it, whether it is in the Catholic Church, Rangers FC or our various establishments. Or perhaps it is the wrong sort of conversation simply because it is merely Catholics who are holding it as insiders rather than the 'radical left'? In which case, reflecting on a real -rather than vaguely imagined- 'conversation' should help get closer to what a proper conversation looks like.)  I mostly agree with Joseph Shaw on its design: his post entitled 'The Worst Survey in the World' is the best analysis of its problems that I've found. But putting on my Panglossian hat, most attempts at conversation are like that: fumbling and dependent on the goodwill of the participants to make up for initial deficiencies. (Lesson 1: life is a vale of tears and conversations/consultations never achieve the sort of frictionless success that progressives imagine.) So how do we make the best, in a spirit of helpfulness, of a fumbling reality?

Well, I think (oddly, considering its source) that Father Gerry J. Hughes' advice is good on this:


The sometimes technical, and sometimes slightly tendentious phrasing of questions should not put anybody off; nor should people be too concerned with the niceties of what they think which, in a poll this size, might well get lost. What is important is that you should

1. identify what you think the question is about

2. give as clear and unambiguous an answer as you can

3.try to give as honest a view of the issue/situation as you  see it, as crisply     as you can

Nuances are not really going to count for a great deal in such a wealth of information.

Remember that those to whom the poll is to be returned, will have to work out the detail for themselves: what they are asking for, is for you to point them clearly in the direction you think best.


So Lesson 2: keep your response clear and simple and focus on the main points you want to put forward.

I'm going to come back to this over the coming days, with some thoughts on what should go into a response. But I suppose my main message would be something along the lines of the following:

You will hear lots of calls to change Church teaching. Ignore them. The key problem is that most Catholics don't understand Church teachings and, in particular, the rationale behind them, and aren't helped to live them out. They are therefore left defenceless against the pressures of modern societies and modern ideologies.

Details of the Scottish consultations (with instructions for how to take part as an individual) are:

For Glasgow: here
For St Andrews and Edinburgh: here.

(If anyone has the links for other dioceses, please let me know in the combox and I'll update the above.)