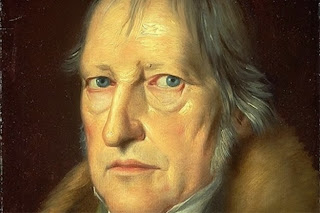 
For reasons unfathomable, my most popular post to date was one on Gerry Hassan and Hegel. Partly in the hope of attracting all those groovy Hegelians out there, partly because the two 'Hs' do just seem to go together so well, I'm returning to the theme...

Hassan's latest essay on the missing voices of public life returns to his well worn case that Scotland is soothed by a comforting narrative which excludes some of the grim realities of life and, relatedly, some types of voice:

One of the positive accounts of modern Scotland which has risen in recent years has been the richness of artistic and cultural Scotland. This was witnessed in the recent Creative Scotland stramash which saw its Chief Executive Andrew Dixon shown the door. An organised group of artists and cultural figures saw themselves as defending the interests of a community and a set of inclusive, enlightened values.
[...]
This cultural narrative of modern Scotland has fed into the political narrative and vice-versa, with both cross-fertilising each other. Thus, the cultural ‘official story’ has been bought into by the political and non-cultural world which has little detailed cultural intelligence or knowledge (with honourable individual exceptions). And at the same time, the dominant political account of Scotland – of difference, autonomy and being a centre-left inclusive nation that doesn’t vote Tory – has been absorbed by the cultural world.

Now what’s the problem with all this you might say? The trouble is that these are selective, panglossian accounts of Scotland. They have elements of truth, but also of omission and significant wish fulfillment.

This cross-fertilisation of cultural and political stories is something little understood. Both reinforce and validate each other, the cultural world buying into the political version second hand with little detail, and the political community reinforcing the cultural story based on scant knowledge. And the cumulative effect of this is to strengthen Scotland’s comforting story of itself: as the land of good people and values who reject Tories and market vandalism.

Now, as so often, Hassan has good points here. There are some nauseatingly simplistic narratives floating around which serve to obscure real problems in education and health. (And indeed art.) But we need to be careful to distinguish between two issues: the quality of any particular narrative; and the poverty inherent in the narrative process itself.

Let the great man (Hegel, that is) speak:

Public opinion therefore deserves to be as much respected as despised — despised for its concrete expression and for the concrete consciousness it expresses, respected for its essential basis, a basis which only glimmers more or less dimly in that concrete expression. But in itself it has no criterion of discrimination, nor has it the ability to extract the substantive element it contains and raise it to precise knowledge. Thus to be independent of public opinion is the first formal condition of achieving anything great or rational whether in life or in science. Great achievement is assured, however, of subsequent recognition and grateful acceptance by public opinion, which in due course will make it one of its own prejudices.

Addition: Public opinion contains all kinds of falsity and truth, but it takes a great man to find the truth in it. The great man of the age is the one who can put into words the will of his age, tell his age what its will is, and accomplish it. What he does is the heart and the essence of his age, he actualises his age. The man who lacks sense enough to despise public opinion expressed in gossip will never do anything great. [Philosophy of Right, Part III, The State, s.318)]

Hegel's point is that public opinion needs to be worked on, to be transformed through institutions such as political leadership and the press into something rational and substantive rather than mere chatter. Now it is perfectly possible to argue that Scotland's current institutions (journalism, artists, politicians) make a bad job of doing this -and that's indeed plausible enough (although it's hard to avoid the thought that most Western democracies might make similar claims). But Hegel's point is that the process of translation and selection is essential and requires the exercise of power, in particular political power. From that point of view, Hassan himself is part of that essential translation of public opinion: as he spins his myth of marginalized selves and Scots troubled by the sense of a 'missing self', new absences are created, new elisions made.

There is a modern version of it in the independence debate with the redoubtable Pat Kane recently commenting, ‘This nation is in conversation’.

Much as I would like it to be otherwise, the whole nation is not engaged in conversation. Challenging such assumptions isn’t about some abstract notion of an idealised, participative democracy, but the limits of Scotland’s public sphere and the truncated democracy we live in. If people want to change that, as I know Pat does, we have to start by reflecting this and then discussing how we change it, not continuing the comforting stories.

Well, unless everyone has become a Trappist, then I suspect the whole nation is engaged in  conversation. The problem is that it isn't focused on the sort of things that Hassan wants it to be focused on, essentially politics and, in particular, the politics of the independence debate. (Even there, I suspect there can't be many households where the subject hasn't cropped up. But I suppose Hassan would then ask: has it been discussed properly? Which is, of course, to say, in the manner in which a certain class of political commentator might approve.)

To transform the texture of everyday life and conversations into a Conversation fit to be approved of is an exercise of power. It would probably take a herd of Foucaults to do justice to the detail of the ways that this happens, but Hassan's piece is itself part of that exercise in construction, highlighting some of the conversations, taxonimizing all, dismissing some. But by presenting this as the merest commonsense, rather than a particular take from a particular standpoint, it merely reinforces what is one of the most pernicious of all Scottish myths, which is that there is an identity between true judgment and the poses of 'progressive politics'.

Perhaps another way of putting this is that all storytellers are liars and, as in Plato's Republic, probably deserve to be expelled from the city. The two spaces within which most of humanity lives out its profoundest experiences are the family and religion, spaces in neither of which we spend much time telling tales*, and rather more simply being (even 'knocking around'). I'm not sure that the life of such spaces can be captured at all in public narratives. But at the very least that capture is extremely difficult, and all I see in narratives such as Hassan's is a relentless focus on what can easily be translated into political campaigns rather than a grappling with the fullness of humanity.

[*Rereading this, I'm conscious how the claim that we don't spend much time in religious spaces telling tales runs against (eg) the obvious fact that a  lot of (bible) stories are told in churches and (in deeper theological mode) the emphasis of a lot of modern theology such as Hauerwas' on narrative. I'd resist this: I think there's a good case to be made that many religious practices undermine the neatness of narrative in a similar manner to the way small children undermine coherent storytelling by vomiting at inconvenient moments or demanding the toilet. But for another time...]