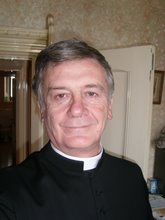 The Catholic priest and blogger, Father Ray Blake, has been the subject of a scurrilous distortion of one of his posts. In essence, Father Ray was reflecting on what Bonhoeffer called 'cheap grace': a discipleship without cost. In his article, he talked about the costs of living out a life which really tried to engage with the poor in obedience to Jesus' instructions. In it, he talked of some of the disruption to his life caused by dealing with drug addicts and drunks, concluding with:

The sin of the Pharisees, of the rich man in the story of Dives and Lazarus is complacence. The rich man didn't even notice the mess that Lazarus created at his front door, he didn't respond to it, he needed someone to bring him out of his complacency. My big difficulty with confession at the moment is that I have grown complacent in my lifestyle, I don't want it changed, the message of the Gospels seem to be let the poor into it to mess it up a little.

Unfortunately, a local journalist has seen fit to transform what was a rather deep reflection on spiritual complacency (and the difficulties of being a parish priest) into a shock article on an uncaring priest. The article has now been sydicated by the national and international press. Father Blake has asked:

I understand Mr Gardner's little piece has been syndicated internationally, perhaps kind readers might, if possible post my response.

This I am now doing. (From Father Blake's blog.)

[Update 10/9/13: a) Richard Collins (Linen on the Hedgerow) has suggested 'a spiritual bouquet' for Father Blake with a daily rosary for a week. Excellent idea which I heartily support (and am currently doing). b) I have added on the sidebar a 'support Father Blake' poster which I'll leave up for the rest of the month.]Thursday, September 05, 2013

Have a look at this article by a'journalist' called Bill Gardner, in our local paper, it is his take on this piece I wrote on the poor.

I was saying that the poor, the really poor, turn our lives upside down. I know the local paper pays peanuts and expects its journalists to create stories in order to get onto the news networks but this is just a malicious and deliberate misrepresentation.

It is very interesting to see what a disreputable journalist can do with a few carefully chosen adjectives. I didn't 'condemn', 'complain', 'blast' etc, and I am pretty certain that some of his other quotes are not my words, especially not, 'test my holiness', I don't speak like that, 'only God is Holy'. Though I admit in an informal moment I might question the marriage of the parents of someone who disrupts the worship of an entire congregation, especially if they consistently steal from the church or other poor people.

It is interesting to see how an unscrupulous journalist can so easily put an entirely different slant on a simple theological reflection, presumably even basic Christian concepts are beyond the comprehension of some.

Well, journalists are obviously as messy as the poor; except unscrupulous journalists can do more damage. Perhaps Mr Gardner might like to help on our soup run, it doesn't have to be 365 day a year, once a week would be fine, providing he treats our clients with respect, or maybe he could take Jason or Daryl or Pawel or Dawn out for a cup of coffee or a meal, or just come a clear up the next time someone comes in and vomits or bleeds all over my kitchen because he is drug or has been beaten up.

Maybe next time I run out of money I could tap him for a few quid when some vulnerable 17 year old girl needs to top up her phone to speak to her mum because her boyfriend has beaten her up or she needs a roof over head because she is sleeping in a tent and it is just few degrees above zero and she is vulnerable, or maybe the next time I am arranging a child's funeral and someone comes to the door in need of someone to talk because they are suicidal I can send them round to Bill's place so he can spend a couple of hours listening to them.Here, to, I am neither complaining, blasting, lambasting or anything else, just asking.
Posted by Lazarus at 02:00