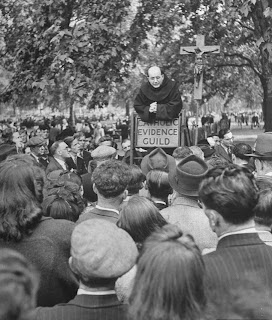 So back to secularism. Last time, as you recall, I'd been posting about how Secularism Scotland (aka Scottish Secular Society) had been banging on about making religious observance in schools a matter for a parental opt in rather than (as it is at the moment) a matter for an opt out. In pursuance of this aim, they've got together a petition to the Scottish Parliament (the background to the petition is explained by the petitioners here).

As a result of my last post, I got some comments from Caroline Lynch and Robert Canning of the Scottish Secular Society. You can see some of my replies in the combox there, but our exchange also raised a general point that I'm going to pursue today.

Secularists tend to live in a black and white world. You are either a 'religionist'/'believer' or you are not. This binary approach structures their analyses: you either have religious observance or you do not. (Hence, the opt in or opt out.) Behind this lies the faith/reason dichotomy: religion is a matter of faith (credulity); non-religion is a matter of reason (reasonableness).

From a Catholic perspective, there is also the exercise of reason, but in a sense, everything we believe is an exercise of reason: we just do it more or less well. If we allow reason full rein, we take advantage of revelation and authority to guide and supplement our cognitive imperfections, whether those imperfections are the result of nature (being human) or personal (being a bit thick). So there isn't a binary division so much as a spectrum: human beings struggling to understand the world and succeeding and failing in a variety of ways.

To secularists, there is simply the choice between being dumb and being smart, which leads to the choice: opt in to religious observance (dumb) or remain outside (smart). For a Catholic, once you step outside the sure guidance of the Church, you have a multiplicity of error and a multiplicity of imperfect graspings after truth.

1) I take to be practically impossible and anyway to violate the aim to 'express and celebrate the shared values of the school community'. 2) I take to be a bad idea because it removes from children's education exploration of the spiritual. (If hard line atheists can't stomach this, then they should have the right to withdraw. But I see absolutely no reason why most Scots' education should be damaged by the unreasonable attitudes of a few.) Which leaves 3) and the status quo (with perhaps some tweakings).

The campaign for the petition rests on two main grounds: firstly, a) the idea that parental choice is a desideratum; and b) that the current situation is clearly untenable. On a), the idea that parents should be able to micro manage their children's education is clearly a poor one. I'm all in favour of a variety of different types of school to reflect parental wishes (hence the existence of Catholic schools and, if the secularists could find enough people willing to bring up their children in such a way, schools for atheists) but once there, educational expertise rather than parental whim should be the main driver. Conscientious objection is fine and not in question. But the idea that parents should in effect be able to vote to exclude a major part of a humane education is foolish. On b), the campaign has pointed to various 'pro-Creationism' leaflets that a school in Kirtonholme apparently let a pastor distribute to their children. The story doesn't seem clear to me (The Scotsman piece here): is this a case of an evangelical Protestant simply being given an opening to explain his views or is he being allowed to dominate religious observance in the school? But let's assume the worst case. Even if one school in Scotland got it wrong, that proves nothing about the general shape of religious observance. (I had a Baptist biology teacher who used to come out with all sorts of odd stuff in biology lessons: should we ban biology or deal with a (possible) individual abuse?)

To get some perspective, this is the range of materials that the Church of Scotland currently suggests as good practice. A random example is 'Be all you can be', (PDF) a proposed secondary school assembly. This contains such shocking sentiments as:


We want to help you think about the big issues in life. Through Religious and Moral
Education classes, Social Education and assemblies we will discuss our views of life.
Life is complicated and you deserve chances to think and decide for yourself. Don't
just accept what other people tell you — even me!

Do I approve of everything in the suggestions? Nope. It sounds pretty fluffy to me. But I'd rather have that gentle reminder that most human beings have taken spirituality seriously than nothing.