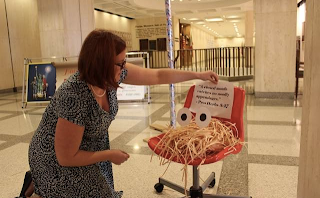 An atheist worshipping round worms...

If I wasn't feeling slightly out of sorts this morning, I wouldn't have started the blogpost like that. (Other than a desire to trigger lots of hits from the enraged Dawkinsians. Welcome, lads! Only  five days to Jesus' birthday.) But quite apart from a slight headache, a combination of close encounters with atheism have triggered a slight cosmic dyspepsia (no doubt aided by a few too many late night glasses of Green Chartreuse which I'm not sure I actually like, but will go on drinking as a symbolic and material support for monasticism).

I finished yesterday an extremely long running debate with a regular cyberatheist commentator in the Catholic Herald combox. (I blogged a bit about it here, but returned to the fray afterwards.) Anyway, it didn't end particularly nicely with me provoking a hissy fit from him by suggesting in expounding his views on ethics he sounded like a nine year old pontificating about the flaws in quantum mechanics. I feel conflicted about this. I certainly wasn't being very nice to him but, equally, he was demonstrating insufferable smugness and ignorance. I'm a believer in the robust defence of truth: it does no one any favours if rubbish isn't named as such. However, I'm well aware of how easy it is to slide into personal vindictiveness on the internet. So I'll need to mull over my guilt here (which never puts me in a decent mood).

And then there are two recent cases of public atheism: the 'holiday' display of the Flying Spaghetti Monster in Florida (here) and the case of the LSE students wearing Jesus and Mo T-shirts who have managed to extract an apology from the university on their having been forced to remove the shirts during a Freshers' fair. (One of them appeared on the Today programme this morning along with a rather hassled university administrator: my sympathies were entirely with the administrator.) 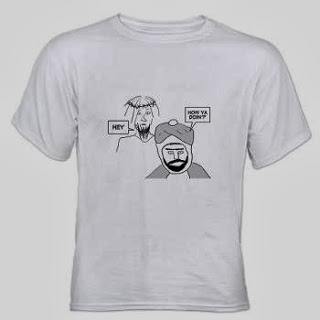 Witty caption on T-shirt: Jesus: 'Hey'. Mohammed: 'How ya doin?' 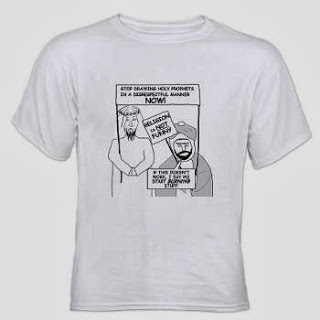 
There are, of course, serious questions of free speech here: the right to criticize, the right to offend. I don't feel that strongly that, in either case, the wrong decision has been made: although there's clearly something to be said about the wrongness of welcoming Muslim students in particular to a university with an image that tells them they're not going to find this a very friendly place, or with disrupting a religious image and festival with a dissonant display, on the whole, I'm usually going to go down the route of favouring free speech and sucking up the offence.

But apart from the question of the right to present these images or displays, it's quite obvious that they are both trivial, sniggering examples of New Atheism's inability to do much other than suck onto religion like an ill-tempered lamprey. I remember trying to find similar cartoons to Mo and Jesus funny when I was an atheist: I had sufficient taste even then to recognize they were the sort of things that you found yourself pretending were funny because you had signed up to the cause rather than because of any intrinsic merit. (The FSM I find slightly more bearable: 'ProvHerbs' had me chuckling.) But good or bad, they are parasitic: the FSM display parodies biblical language (the board says: ‘A closed mouth catches no noodly appendages.’ – ProvHerbs 3:27); the Jesus and Mo -well, guess where they got those characters from originally?

In both these cases, it was a case of free speech being invoked to protect mockery. In principle, that's fair enough: mocking someone or something can be a useful exercise. (Perhaps I should feel better about guying the cyber-atheist?) But religion, unlike New Atheism, is essentially a serious exploration of life: Islam and Christianity are thoughtful engagements with humanity in a way that neither Pastafarianism nor the tedious sniggers of Jesus and Mo are. Personally, I don't find it unreasonable that, in certain times and certain places, the seriousness of the public space is protected: we don't allow whoopee cushions to disrupt the Coronation Service and I don't see why (really) we have to allow self-righteous student prigs to go out of their way to offend Muslims in their first few days in the very stressful environment of a new university, or for an aesthetically challenged mound of dry pasta to undermine a crib scene. If there's no principled way of doing this without risking the wider value of free speech, then I guess we have to put up with the irritation. (I frankly can't be bothered to wrestle with the issue at those deeper levels just now.) But let's be clear that it is an irritation and that those atheists who indulge in such things are nuisances rather than the brave defenders of humanity that they seem to see themselves as.