Being in two places at once: Plotinus and Augustine 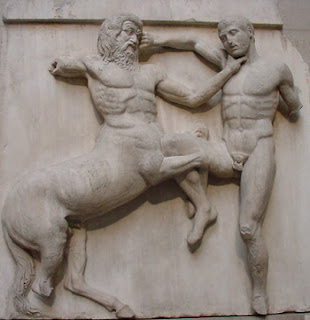 One of the odd -yet regular- aspects of Catholicism is that one finds oneself in two levels of existence at once. One exists in a Church that has been responsible for some of the highest flights of intellect and art; one finds oneself in a Church surrounded apparently by the work of five years olds. Byrd wrote Mass settings for our Church; the Praise Band warbles on accompanied by a kazoo...

And so, for the Ascension Day Mass yesterday, I find myself in a rather ill-judged 1970s' building, listening to a priest with a tendency to the folksy. But he has obviously said his Office of Readings today because there is a strong reminder of Augustine in the homily:

Why do we on earth not strive to find rest with him in heaven even now, through the faith,  hope and love that unites us to him? While in heaven he is also with us; and we while on earth are with him...

[From today's Office of Readings: attributed to a sermon by Saint Augustine]
It's odd, sitting there in fairly unprepossessing surroundings, but hearing something which touches on a theme which runs through Plotinus: the soul's dwelling at the same time with the Divine but also on the earth (from the Mckenna translation here):

Many times it has happened : Lifted out of the body into myself ; becoming external to all other things and self-encentered ; beholding a marvellous beauty ; then, more than ever, assured of community with the loftiest order ; enacting the noblest life, acquiring identity with the divine ; stationing within It by having attained that activity...yet, there comes the moment of descent from intellection to reasoning, and after that sojourn in the divine, I ask myself how it happens that I can now be descending, and how did the soul ever enter into my body, the soul which, even within the body, is the high thing it has shown itself to be.

The entity, therefore, described as "consisting of the undivided soul and of the soul divided among bodies," contains a soul which is at once above and below, attached to the Supreme and yet reaching down to this sphere, like a radius from a centre. Thus it is that, entering this realm, it possesses still the vision inherent to that superior phase in virtue of which it unchangingly maintains its integral nature. Even here it is not exclusively the partible soul: it is still the impartible as well: what in it knows partition is parted without partibility; undivided as giving itself to the entire body, a whole to a whole, it is divided as being effective in every part.

I'm sure the Dawkins brigade will sneer at ancient myth; I'm sure evangelicals will mutter about how the Catholic Church looks to Athens far more than it does Jerusalem. Well, so much the worse for them: this splitness of the human is as clear a fact of human experience as anything else and we should be talking about it. And, indeed: here we are, talking about it. A very ordinary, predominantly working class parish, with its priest talking about the way we live both with God in heaven and yet in time.

Catholics -well, I- don't deserve Catholicism. We squabble; we create ugliness; we're smug. If we can get through this generation without having completely destroyed the Church, it sometimes seems that would be achievement enough. That is indeed one of our main tasks: if we cannot appreciate Catholicism, not to destroy it for future generations who may be a better audience than we are. And yet, perhaps even for us, the occasional glimpse of our true life at  'rest with him in heaven even now'.