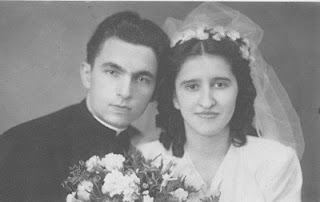 Spotting a link (H/T Catholic Herald)  to John Haldane's article in the Tablet  which, among other things, called for the admission of married men to the priesthood, prompted me to go out and buy the wretched paper.

The shortened online version (which I've linked to above) perhaps gives a misleading impression of the whole article: the suggestion about celibacy takes up only a couple of paragraphs, the bulk of the article being a reflection on 'A Church in dire need'. On the other hand, those paragraphs form the conclusion to the article, and it's hard not to see them being offered as the single most important solution to the crisis in the Church.

This is not a case of simply increasing the number of clergy, nor is it a easy way to solve the decline in vocations. Rather, a married contingent can better resemble and reassemble the faithful and speak to people of what they know about their needs and difficulties. Married priests could also speak to celibates from within the brotherhood of the ordained. Even if it were only for the sake of providing a compelling argument against this proposal, the matter should be addressed as the Synod of Bishops, currently gathered in Rome, reflects on the challenge of the New Evangelization.

The crisis deepens and still we are waiting. Let it not be said of the synod, 'We hear men speaking for us of new laws strong and sweet, Yet is there no man speaketh as we speak in the street."

The diagnosis of the crisis is that the Church is under two forms of attack: an elite, post Enlightenment attack on Catholicism as the most conspicuous opposition to secular values; and a popular attack on the institution as a result of priestly abuse. Implicit in the article is also a third element in the crisis: a weakness within the Church in part characterized by

...a rise in materialism marked at one level by an implicit adoption of a general consumerist culture, and at another by the politicization of religious thought and behaviour. The latter comes in two forms: 'conservative' and 'progressive', and although each opposes the other, they are united in seeking recognition and influence. The 'conservative' version is nostalgic and slavish; the 'progressive' variant is faithless and craven in its desire for secular acceptance.

Now although the article isn't entirely explicit about this, I take it that it's the second and third elements of the crisis (the popular disgust with the Church, and the weakness within the Church) that removal of compulsory celibacy is supposed particularly to remedy: it's hard to see how such a change would affect an elite attack that has been going on since the 18th century.

My problem with this is that, coming from an Episcopalian background, I've seen married priests in action. I've also seen the admission of candidates to priesthood on a '(shortened) formation' (Non Stipendary Ministers). (Come to that, I've even seen women priests.) Now my conclusion from this experience is that at best, such a change will make very little difference, and, at worst, it might even exacerbate the crisis. Let me concede one point immediately: it's quite likely that, by allowing shortened formation periods for married men, you would increase numbers of priests. And to the extent that there is a problem with numbers of priests -and there clearly is some problem here- you might have a remedy in Haldane's suggestion. However, I'm not convinced that the shortage of priests is, historically, quite as serious as is being made out: there have been periods (think recusancy) when access to the sacraments has been far more difficult than it is now; there are areas where the shortage is far worse than in Western Europe: 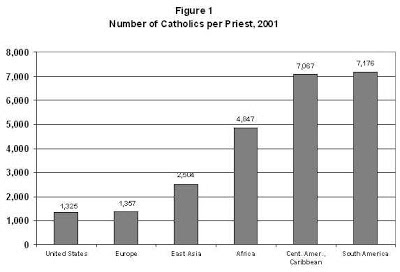 Certainly, the existing parish structure of the Church will not survive a further reduction in numbers of priests, but it's by no means clear that's a bad thing. The Episcopal Church in Scotland is dogged by the continuation of small parishes of exclusively elderly congregants, made financially viable by the free labour of non-stipendary ministers. I'm not at all clear that such an immunization to the pressures of changed demographics is a good thing: paradoxically, a measure intended as a 'bold initiative' may simply compound resistance to needful change in how a church engages with modern society.

But let's grant that ordination of married men would carry the advantage of increased numbers of priests. What of the other claimed advantages of being better able to 'resemble and reassemble the faithful and speak to people of what they know about their needs and difficulties'? I'm frankly not convinced by this. There are two aspects to this: a) one of the major problems within the Church is a lay complacency -a contentment with (indeed pride in) the conclusions of their own secularized education and inadequate theological understanding. We need priests who are not like us, but who can remind us of our deficiencies, particularly in catechesis. A priesthood which transcends us is at least as important as a priesthood which resembles us. b) To the extent that 'resemblance' is a desideratum, it's easy to overemphasize the difference that celibacy (or marriage) makes. Educational and class background as well as personality are as much issues here as marital status All in all, I have found rather more in common with some celibate priests than I have with some married priests: married priests in my experience lead to an embourgeoisement of the clergy which can be far, far more off putting than celibacy.

This is perhaps missing the main thrust of the article which, I suspect, at least implicitly, is the line that people within and without the Church will trust it more in the area of child abuse if it has married priests. But to state this is immediately to see that it's flawed reasoning. Everyone really knows that married men are just as likely to abuse as pretend celibates. The statistics show it. Commonsense and anecdote show it. At best, by introducing married men, you may get some people to acknowledge the beginnings of a (putatively positive) change in the Church. But no one coming from this line of thought will regard it as sufficient.

The Catholic Church is widely seen by non-Catholics as having a hang up about sex, and simply bringing in married priests won't cure that. When acquaintances tell me that I'm a member of the world's largest paedophile ring (and they do quite regularly), they know I am married and have children. I don't think they (usually) consider that I am actually abusing my own children, but they do think that I am part of a system which does. I see no reason to assume that having married priests will alter that: they too will be seen as collaborators. Of course, it will be said, if this is the first step, to be followed by allowing contraception, women priests, celebration of gay relationships... Then we'll know that everything is all right. But all that clearly isn't a real possibility for orthodox Catholicism.

In sum, married priests might solve the numbers issue, but even that isn't a clear gain. In regard to the 'softer' advantages such as resemblance to the laity and plausibility in the issue of child abuse, such advantages, even if they exist are small and doubtful; and there are clear disadvantages. (Ask divorced clergy.) Maybe married priests should be allowed: it's clearly possible in a way that allowing women to be priests isn't. But my own view is that the advantages are so unclear that it's an unwise step.

After all, it's not that the married ministry of the Protestant churches is so obviously successful...


But today the Church of Scotland, founded with such lofty ideals, looks to be a kirk in crisis.


[The rather nice photo of a married Greek Catholic Priest above is from the OrthCath blog which also has an interesting article on married priests in the Byzantine Rite.]
Posted by Lazarus at 04:15