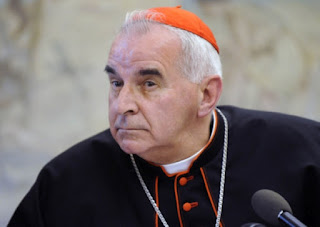 I know bloggers are supposed to project an air of omniscience in which no topic, however arcane, or no piece of tittle tattle, however exclusive to the Holyrood village, is unsuitable material on which to exercise our nearly infinite intellects... But I really have absolutely no idea where this came from and where it's going to.


THE Scottish Government yesterday dismissed claims that the lead researcher on its same-sex marriage consultation “insulted” Christian views and was  rude about Cardinal Keith O’Brien.

The allegations surfaced in a parliamentary question tabled by Michael McMahon, the Labour MSP for Uddingston and Bellshill.

Mr McMahon asked the Scottish Government about its position on “reports that the lead researcher on its consultation on civil partnership and same-sex marriage ‘insulted and belittled’ Christian views while preparing the report and ‘directed obscenities’ at Cardinal Keith O’Brien in the presence of other members of the analysis team.”

The reports were denied by Alex Neil, the minister in charge of the gay marriage legislation.

It's all very unclear. Is it claimed that the researcher insulted him face to face? Or did s/he (the name on the consultation report is Lucy Robertson) simply badmouth him afterwards in office chat? (Given the usual mindset of those non-Catholics with a social science background in Scotland, it'd probably be more of a story if s/he hadn't badmouthed him.)

It'd be hard to demonstrate any bias in the report. Those of us who were naive enough to think there might be some engagement with the substance of our arguments won't have got much out of the finished article which is simply an analysis of the responses with no attempt to engage critically with any of the views. I'm not sure bias in wielding scissors and paste would be evident. The report fails to engage critically with the issues, but that could be said by both sides of the argument. They'd made up their minds. It was a mere formality.