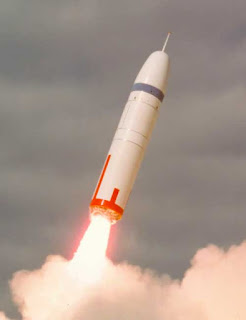 Perhaps describing nuclear weapons as a 'hot button' issue for Catholicism would be a little tasteless. However, given the recent focus on the closure of the Faslane base as a consequence of Scottish independence, it's worth reflecting on the Church's attitude to them.

In Scotland, the Catholics Bishops and particularly Cardinal O'Brien have been clear in their opposition to the UK's possession of nuclear weapons. For example, in this (PDF here) study document produced in 2006 for the Archdiocese of St Andrews and Edinburgh, Cardinal O'Brien is quoted:


With the Trident nuclear weapon system fast becoming obsolete, and the debate concerning its replacement  promised by our government, now is the time for all men and women of Easter faith, men and women of good will, men and women of peace, to raise our voices. Enter this debate and demand that these weapons of mass destruction be replaced, but not with more weapons. Rather, replace Trident, as the Holy Father has said, with projects that bring life to the poor.

This opposition was reiterated in April 2011 by the Cardinal at Faslane:


Here at the gates of Faslane, there is no better place to say that it is not courageous of Britain to have these dreadful weapons of mass destruction. It is shameful to have them.

Trident is fast becoming obsolete, and we have the chance now to do the right thing and give it up. We have the chance to be peacemakers, echoing the Easter desire of Jesus Christ for a lasting peace.

I've been speaking of the teaching of the Catholic Church on nuclear weapons for many years now, telling our message to whoever is willing to listen, and I'm very pleased to repeat that teaching again today. As you'll see, it's a consistent teaching, a central part of our pro-life stance that has human dignity at its very core.


Moreover, the opposition is not new. In 1982, in an Easter statement by the Catholic Bishops' Conference of Scotland, the UK government's policy of nuclear deterrence was clearly condemned as immoral:


According to the statement, if it is immoral to use nuclear weapons, then it is immoral to threaten to use them...Quoting from the Vatican Council, the bishops call the arms race "a theft from the poor" and "one of the greatest curses on the human race".
"Too much energy has been spent on preparations for war, too little on making peace," the statement said. The Church in Scotland is, therefore, in "an anguishing situation".

From the point of view of Scottish Catholicism, the condemnation of Trident has been loud and consistent. This condemnation rests primarily on the sacredness of human life, and on the difficulty in seeing how use of nuclear weapons could ever be regarded as a legitimate defence of life in accordance with the principles of a just war:


• The use of force must be a last resort. We have a prior obligation to avoid war if at all possible.

• The use of force must be discriminate. Civilians and civilian facilities may not be the object of direct, intentional attack and care must be taken to avoid and minimize indirect harm to civilians.

• The use of force must be proportionate. The overall destruction must not outweigh the good to be achieved.

• And there must be a probability of success.


As a comparison, although Catholic bishops in the US have not called for immediate and unilateral disarmament, their push towards disarmament has also been consistent:

Both the Holy See and our Bishops’ Conference have spoken about the strategy of nuclear deterrence as an interim measure. As the U.S. bishops wrote in 1983: “Deterrence is not an adequate strategy as a long-term basis for peace; it is a transitional strategy justifiable only in conjunction with resolute determination to pursue arms control and disarmament.

(For a discussion of the Catholic position and its application to the US, see here, from which the above quote is taken.)

The SNP has enough reasons to oppose nuclear weapons anyway with 70% of the Scottish public against the replacement of Trident. (For CND article see here.) But if I were an SNP Machiavel looking for ways to bring Catholics (and particularly the Catholic hierarchy) back on side despite the same sex 'marriage' debacle, I'd start by making vaguely anti-abortion noises and then follow up with a clear reminder of the party's opposition to Trident.