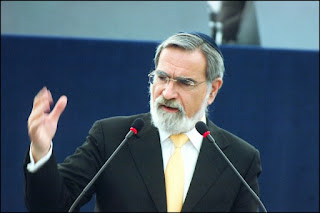 Down with that sort of thing....

The Chief Rabbi has spoken out in favour of government support for marriage:


Ministers must do more to encourage marriage and support stay-at-home mothers, the UK's chief rabbi has said.

Lord Sacks, who is about to step down from his post after 22 years, told the Times the government "should certainly recognise marriage in the tax system"....

"I think the government has not done enough," Lord Sacks said.

"The state has an interest in marriage because the cost of family breakdown and non-marriage, the last time I looked at it, was estimated at £9bn a year."

Of course, this is just the Chief Rabbi 'not getting with the programme' as the Prime Minister would doubtless put it. Marriage in England and Wales (Scotland, no doubt, soon to follow) is not about having children. It's not even a particularly good idea but just one life style choice among many. With the introduction of same sex 'marriage', 'we' have decided that there is no pressing need for an institution dedicated to ensuring the best environment for the upbringing of children, but that there is a pressing need for an institution which allows people to watch their aged Ps' doing the birdy dance and giving  slightly long in the tooth friends a chance to get pie-eyed on cheap fizz.

Cameron and Salmond should give this beardie loon a quick dressing down. There is no point in marriage now it has been severed from its function of procreation and education. To encourage marriage now is akin to subsidizing Friday nights down the pub.