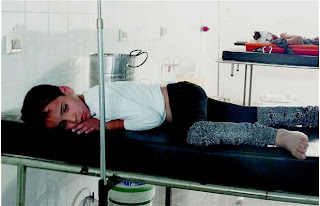 Catholics believe in the possibility of a just war, so the suggestion of military intervention in Syria is not something that can be rejected out of hand.

Turning to the Compendium of the Social Doctrine of the Church, you could start with the broad principles of the Just War (s. 500)

To be licit, the use of force must correspond to certain strict conditions: “the damage inflicted by the aggressor on the nation or community of nations must be lasting, grave and certain; all other means of putting an end to it must have been shown to be impractical or ineffective; there must be serious prospects of success; the use of arms must not produce evils and disorders graver than the evil to be eliminated.

And you could follow that up with the duty to protect the innocent (s.506):

The international community as a whole has the moral obligation to intervene on behalf of those groups whose very survival is threatened or whose basic human rights are seriously violated. As members of an international community, States cannot remain indifferent; on the contrary, if all other available means should prove ineffective, it is “legitimate and even obligatory to take concrete measures to disarm the aggressor”.[1063] The principle of national sovereignty cannot be claimed as a motive for preventing an intervention in defence of innocent victims.[1064] The measures adopted must be carried out in full respect of international law and the fundamental principle of equality among States.

On the principles, again, it's roughly the case that they represent a combination of deontological moral reasoning and consequentialist. There is no point doing something if it doesn't work. Clearly 'something must be done' in relation to the use of chemical weapons (if, as seems likely, it did occur). But it is quite possible that nothing, in the short term, can be done, or that punishment will only make matters worse. Good intentions here aren't enough. Moreover, even if military intervention 'works', it can't be at the expense of using people (in the Kantian phraseology) as 'means rather than ends': you can't go around slaughtering people just to make your point. Finally, although individual governments may have a legitimate right of intervention, there is a strong bias towards the authority of international rather than national action: some sort of international consensus would help here.

On flipping through the Compendium just now, it's clear that, beyond all the details here, there is (rightly) an overarching need to avoid violence where possible and to resort to diplomatic and other non-violent means: whatever is done must be done with the aim of achieving a just and peaceful world order.

So what does that add up to? I don't know, and to be honest, perhaps one of the most important things now is for people (including politicians) to admit their lack of knowledge. There is a great temptation for a democratic leader to try to look as though he or she is in charge: firm, resolute, having no doubts of the direction in which we should travel. I'd recommend thinking about what it is to exercise the virtue of practical wisdom (prudentia) in this case and particularly its connection with the virtue of humility.  Our MPs and Prime Minister could do far worse than flipping through the relevant chapter of the Compendium and praying:


Prayer for peace in Syria

God of Compassion,
Hear the cries of the people of Syria,
Bring healing to those suffering from the violence,
Bring comfort to those mourning the dead,
Strengthen Syria’s neighbours in their care and welcome for refugees,
Convert the hearts of those who have taken up arms,
And protect those committed to peace.

God of Hope,
Inspire leaders to choose peace over violence and to seek reconciliation with enemies,
Inspire the Church around the world with compassion for the people of Syria,
And give us hope for a future of peace built on justice for all.

We ask this through Jesus Christ,
Prince of Peace and Light of the World,
Amen.

Petition: For the people of Syria, that God may strengthen the resolve of leaders to end the fighting and choose a future of peace.
We pray to the Lord…