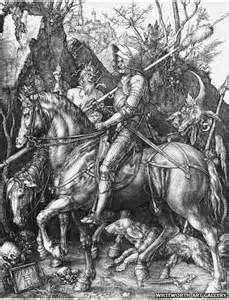 Marlborough has left for the war / Nobody knows when he will come back.


He will come back at Easter / Or on Trinity Sunday.
Trinity Sunday goes by. / Marlborough does not return.
My lady climbs up her tower / As high as she can climb.
She sees her page coming / All clothed in black.
"Good page, my good page / What news do you bring?"
"At the news that I bring / Your pretty eyes will start crying!
"Take off your pink clothing / and your embroidered satins!
"My lord Marlborough is dead; / he is dead and buried.
"I have seen him borne to the grave / by four officers.
"One of them carried his breastplate / another his shield.
"Another carried his great sabre / and the last carried nothing.
"On his tomb was planted / a beautiful flowering rosebush.
"When the ceremony was over / Everyone went to bed. [From Wikipedia.]

As I've mentioned previously, I'm currently buried ('mongst other square, papery (but digitalized) things) in the works of Sir Walter Scott (42% through according to my Kindle).

One of the things that immersing yourself in a different sensibility can bring is a bringing to the foreground of consciousness facts that we in our age tend to overlook and that other ages faced up to squarely. I'm pretty much convinced that one (if not the) central theme of Scott is social cohesion: how groups (especially the Jacobites and the Hanoverians) can live together in social peace whilst loathing each other and whilst having each other's blood on their hands. I'll probably come back to this in the future, but the answer certainly isn't the imposition of a common loyalty: instead, and briefly, it's much more to do with a recognition of common humanity, deliberate avoidance of certain issues, having a 'flexible' attitude to law and authority, and the aestheticization of violence. Not a very modern mix, of course, but probably all the better for that and possibly one from which we can still learn.

But a subsidiary theme is that of the violence of young males. Duels are fought. Most of the old have spent their youth on some battlefield or other. The solution to life's problems of going abroad as a soldier exists as a constant possibility. Even if we haven't been reading Scott, we ought to be familiar with such a vista. The male members of the two previous generations of my family fought in the army. (I pass over my own exalted -if brief- service in a school CCF troop.) I've worked with several former soldiers and we're all familiar with the young men who went off to fight in the Spanish Civil War. (And rather closer in time and space, there is the  'Armed Struggle' in Northern Ireland.) Idealism and a tendency to violence are characteristics of young men. If channelled correctly, they form part of the social mix, the activity of the young balancing the resignation of the old etc.

So I'm not really sure why 'we' are surprised at young men going off to fight for ISIS. It seems perfectly reasonable to worry about what effects this will have on UK society: whilst I've no doubt that most will probably not come back to take up an armed struggle here, it seems implausible that none will. And certainly an attitude of mind forged in an armed struggle is unlikely to accept an easy cultural integration into modern British ways. So it's certainly reasonable to worry about (eg) security implications and to act accordingly. But constantly using the language of indoctrination and manipulation of these men is silly:

The media attitude to ISIS, quite apart from a core, commonsense worry about national and international security, demonstrates many modern failings. It decorporealizes minds: instead of acknowledging that the young and the old, male and female, have a different biology and different characteristics, it regards all as disembodied reasoners with only one rational path. It undervalues religion: the intensity of religion's pursuit of justice surprises those whose lives lack commitment or transcendent values. It invents rational expertise: last week's pundit who knew everything about Putin's Russia now knows everything about the Middle East. It is orientalist in creating a landscape of the Other populated neatly with homogeneous and docile 'communities' (ie tribes) led by community leaders. And so on.

There probably isn't an answer. Some of us will probably die in the long run as a result of terrorist actions. The Middle East sounds like it's on its way to becoming a Hell for a time, especially for Christians. What can be done in terms of security precautions should be done, but without destroying the normal business of society. But on the specific problem of angry young men, and particularly angry young Muslim men, the only answer (and it's a partial one) is to do what societies have always done: find a way of channelling their energies into the wider society through the institutions of the family, civil society and the State. At the moment, the family is being deliberately undermined, the economic crisis of the West is destroying business and employment, and politics is closed to those who cannot mouth the secularized platitudes of consumerist liberalism.

"Are you willing to sacrifice this for the sake of Allah? Definitely! If you sacrifice something for Allah, Allah will give you 700 times more than this."

Later in the video, he says: "All my brothers living in the west, I know how you feel.

"When I used to live there, in the heart you feel depressed. The cure for the depression is Jihad." [Here.]


Perhaps, in the end, it's about death: the Jihadists have retained a sense of the inevitability of death and killing that the modern West has lost. In that case, perhaps the true resistance is to face our own death well, even matter of factly. If so, please note that I will not be dying for 'British values' but for Catholic ones.