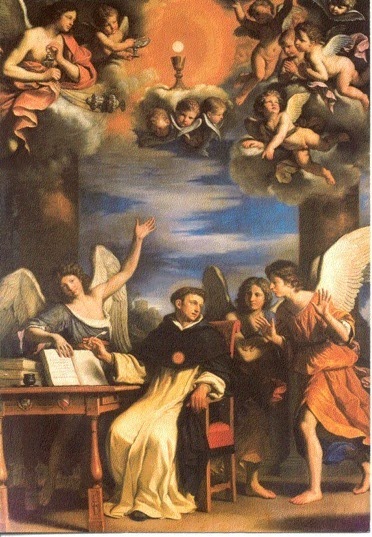 There's been a rather interesting exchange going on between Ed Feser (Thomist extraordinaire) and Michael Sullivan of the Scotist blog, The Smithy on Feser's recent Scholastic Metaphysics: an Introduction. [Feser's latest post on this -with links to further instalments of Sullivan- is here.]

In essence, the debate centres on two points. First, is Feser's version of Scholasticism too exclusively Thomist, particularly at the expense of Scotus? Secondly, is it too ahistorical, smoothing over detailed engagement with actual Scholastic writers in favour of quick neo-Thomist caricatures? The detailed posing (and answering) of these questions is an education in itself -and I'd urge anyone even remotely interested in understanding Scholasticism to read the posts and the combox discussions (as well as Feser's book!).

Behind any detailed criticism of the book, however, stand rather more general issues about the nature of philosophy in general, and Scholasticism within the Catholic Church in particular. To pluck away at a couple of these:

a) Grand narratives vs detailed grappling. There is a tendency in academic philosophy (particularly English language analytic philosophy) to focus in incredible detail on narrow issues. The good (essential) aspect of that is rigour: carefulness in argument and examination is necessary to achieve truth: there are no shortcuts. On the other hand, there are losses. One loss is that of popular engagement. For philosophy to engage outwith the academy, it needs to deal in recognizable issues in recognizable ways: too much technicality and narrowness of focus and philosophy becomes confined to the philosophy department. (Whilst there is clearly more to be said about how philosophy can be both rigorous and popular, I'll leave it with the simple (and I hope plausible) claim that highly technical philosophy can't be popular and that, since some philosophy needs to be popular, not all philosophy can be highly technical.)

Perhaps an even more serious loss is the absence of what I shall style 'narrative imagination'. To take two particular examples, one of the most influential recent-ish works in English speaking philosophy has been that Alasdair MacIntyre, in particular, that of After Virtue. Much of that work involves an historical narrative that, to put it mildly, is open to detailed criticism.: if MacIntyre had stopped to deal with every detailed point that could be raised against his narrative, the force of the work would have been much diminished. A similar point could be made about the (again influential) Radical Orthodoxy movement in theology. If Milbank's Theology and Social Theory -which again contains a rather 'sweeping' narrative- were to grapple with every possible detailed criticism, again, the force of the work would have disappeared.

There are clearly many possible reactions to such a (clearly true) observation. One possibility is simply to abandon the idea of a grand narrative and to concentrate on detailed grappling. I'll simply note that, in my view, such a solution has unfortunate consequences both ethically (in depriving individuals of a sense of their place in an historical narrative) and pedagogically (in depriving pupils of a sense of  shape to an issue which they can then subject to further critical scrutiny). Another (and this I'd favour) is to note that both the grand and the detailed are required: in any healthy intellectual ecosystem, there will be a creative tension between those who produce imaginative narratives and those who subject them to detailed critique.

b) The place of philosophy in Catholicism. As I've made clear over the history of this blog, I'm in general sympathy with the view that the loss of neo-Thomism (ie the sort of Thomism of the nineteenth and twentieth century manuals) as an intellectual tradition in Catholicism is at least as serious a loss as any that has been felt in the liturgy. (Let's not get bogged down in details: there's a problem in liturgy in the modern Church and there's a problem with the destruction of neo-Thomism.) This has (at least) two aspects. First, there is the loss of a focus on St Thomas Aquinas. By taking as alternative paradigms either non-Catholic thinkers such as Levinas, Lacan, Derrida, Butler etc, theologians have cut themselves off entirely from (at the least) an extremely rich intellectual model which attempts to do justice to reason, revelation and ecclesiastical authority. But while this is true of some (perhaps even many) Catholic theologians, it also remains true that Aquinas has not been ignored and yet remains a central figure in theology. (Even the much attacked Tina Beattie has recently published a monograph on him.) From this aspect alone, things could be a lot worse.

Which leads me on to the second aspect. Neo-Thomism had a particular understanding of a number of issues, in particular, the place of philosophy within Catholicism. Roughly put, most neo-Thomists thought that philosophy -reason unguided by revelation- could attain truth, albeit incomplete and albeit with difficulty. Moreover, neo-Thomism was, to a large extent, a creation of teaching institutions and, especially, seminaries: it was a Thomism shaped by the need to be taught and used by those who were not professional and specialized theologians, but who were priests engaging with ordinary people and non-Catholic intellectual challenge. Much modern Catholic thinking even when approaching Aquinas is fideist (ie carried out in terms only acceptable to those who already accept dogmatic teaching) and academic (destined for an audience of other professional theologians or students). In other words, neo-Thomism carried in a narrative imagination an understanding of what it was and how it fitted into the world that is lacking in other Catholic theologies, and indeed other grapplings with Aquinas.

What follows from this? In terms of Feser's book, its characteristics are those (unsurprisingly) of a neo-Thomist: what it foregrounds and what it glosses over are precisely what you'd expect from a neo-Thomist. If this is surprising, it is only because the neo-Thomist has become a rara avis. In more thickly populated intellectual flocks (analytical philosophy, for example) very few stop to wonder why introductory manuals fail to take seriously the details of natural theology: the writing off of an intellectual tradition has taken place as part of the background narrative imagination. If you think his approach is wrong, then the problem lies less in the book and more in the background movement.

More importantly, Catholics (lay and clerical) need to develop an intellectual culture which can function as an ancilla theologiae -a preparation for revelation. That is wider than philosophy, but it includes philosophy. I think that's best conceptualized as a return to neo-Thomism, but I'd be open to (and indeed sometimes personally do) think of it as a return to the philosophia perennis of the Greeks of which Thomism is merely the final flourishing, or (in politics) to the politics of natural right envisaged by Leo Strauss. Each of those conceptualizations is an act of narrative imagination and is open to detailed critique. But I'm pretty sure that, without some such boldness of vision, Catholic intellectual life is going to be steamrollered by the narrative imagination of secularism.

As a coda to all this, let me quote from my current bedtime reading (Garrigou-Lagrange's Le Sens Commun -which primarily contains his refutation of Bergson and I'm reading as a proleptic refutation of post-modernism). In that, he sketches the content of the philosophy of common sense:

[The anthropologist Le Roy obtained from his field studies of primitive peoples] a residue of common elements which corresponds almost exactly to what is, for traditional philosophy, the content of common sense:

1) Distinction between the invisible and visible worlds.
2) A feeling of human dependence in respect to the superior world, particularly in the use of nature.
3) Belief in a Supreme Being, creator, organizer and master of the world and at the same time father of human beings.
4) Belief in independent spiritual beings, some beneficent, some hostile.
5) Belief in a human soul, distinct from the body, conscious, surviving death.
6) Belief in a world beyond, where spirits live and souls survive.
7) A universal moral sense, based on the distinction between good and evil, feelings of justice, shame, responsibility, liberty and duty. Implicit or explicit recognition of conscience.
8) Prescriptions and proscriptions in view of a moral end; a notion of sin with sanctions applied by the authority of the invisible world or its representatives.
9) The organization of culture, prayers and sacrifice.
10) A priesthood charged with sacred duties.
11) Distinction between the sacred and the profane.
12) Establishment of the family as religious and social centre.

Nothing there, I think, to surprise, say, the reader of Plato or Confucius. But remember this is supposed to be the pre-existing foundation on which revelation then builds. To even achieve this level of explicit belief in a secularized public culture is going to be quite an achievement although -and this is the intriguing aspect for me- implicitly I'm pretty sure this is what most people actually do believe even in the West. (Thought experiment: watch reruns of Buffy the Vampire Slayer or Battlestar Galactica whilst regarding the above as foolish.)