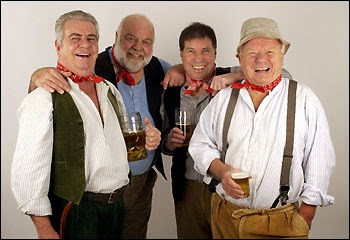 
One of the great things about being conservative is that you're allowed to be stupid: indeed, it's positively a vocation. One resists grand narratives of decline and fall and the cheap theories of bearded Germans, and one sticks to more local verities. In particular, one assumes that evil and criminality are abiding features of the world, and primarily one doesn't worry too much about that except to arrest criminals when you find them and lock them up.

Of course, being a highly complicated and interesting chap myself, I don't mind slumming it with a little Hegel or even Marx now and then. But it's strictly a hobby, you understand. Mostly, I just want the criminal justice system to get on with protecting the virtuous and harmless against the vicious and harmful, and not worry too much about the grand sociology that underlies it all. (To put a Catholic spin on all that, we should be suspicious of theories that attempt to pin down the mystery of evil and explain it away as a factor of society or culture: evil is fundamentally a matter of intelligent agency and traditional Western law recognized that.)

So when one comes to the Rotherham rape gangs, I see it primarily as a police and criminal law issue. Bad men did bad things and got away with it for far too long: there seems little merit in worrying about deeper theoretical issues such as the putative link between patriarchy in Islam and child abuse. Most of the things that went wrong seem to be fairly straightforward failures in policing or control of children (particularly by the council operating in loco parentis) (all para references to the report here):

One parent, who agreed to her child being placed in a residential unit in order to protect her, wrote to children’s social care expressing her fears for her daughter’s safety. She described her despair that instead of being protected, her child was being exposed to even worse abuse than when she was at home:
“My child (age 13) may appear to be a mature child, yet some of her actions and the risks to which she constantly puts herself are those of a very immature and naïve person. She constantly stays out all night getting drunk, mixing with older mature adults, and refuses to be bound by any rules.” (5.11)

Or the case of criminal gangs being allowed to intimidate without police response:

Within just a few months, Child B and her family were living in fear of their lives. The windows in their house were put in. She and her family received threats that she would be forced into prostitution. (5.22)

most of the men in South Yorkshire who were involved in the sexual exploitation of young people for the purposes of prostitution were also believed to be involved in drug dealing. They might also be involved in rape, violence, gun crime, robbery and other serious criminal offences; (10.22 (a))

If one looks more widely than the Rotherham problem, we see here recurrent social issues: the difficulty in exercising adult control over teenage behaviour; the difficult of the police in exercising effective responses to criminal gangs.

It is clear that one area that police action failed miserably was in the control of taxi drivers:

One of the common threads running through child sexual exploitation across England has been the prominent role of taxi drivers in being directly linked to children who were abused. This was the case in Rotherham from a very early stage, when residential care home heads met in the nineties to share intelligence about taxis and other cars which picked up girls from outside their units. In the early 2000s some secondary school heads were reporting girls being picked up at lunchtime at the school gates and being taken away to provide oral sex to men in the lunch break. (8.16)

The paragraphs following this makes absolutely clear that, whether as a result of poor regulations or poor application of those regulations, taxi drivers became a key way in which girls were brought into abuse or kept in it. I've no doubt that most drivers are probably Pakistani (as has been widely claimed in the press): it's also completely clear that effective action in this area is not dependent on identifying ethnicity or religion.


Against the narrative of brutal Paki males abusing second class women, the report continually emphasises the unfinished business of the investigation of homosexual abuse:

Generally, there has been relatively low reporting of sexual exploitation of young males, with the exception of the police operation and a criminal conviction in 2007 of an offender who abused over 80 boys and young men. Over the years, this was identified at inter-agency meetings and in CSE plans as an issue that required attention in Rotherham. That continues to be the case today. (4.16)

Or the (continued) underassessment of abuse of Pakistani women:

The Deputy Children's Commissioner’s report reached a similar conclusion to the Muslim Women's Network research, stating 'one of these myths was that only white girls are victims of sexual exploitation by Asian or Muslim males, as if these men only abuse outside of their own community, driven by hatred and contempt for white females. This belief flies in the face of evidence that shows that those who violate children are most likely to target those who are closest to them and most easily accessible.' The Home Affairs Select Committee quoted witnesses saying that cases of Asian men grooming Asian girls did not come to light because victims 'are often alienated and ostracised by their own families and by the whole community, if they go public with allegations of abuse.' (11.16)

What to make of all this? First, that race isn't the most immediate issue here. (And, by covering up abuse of Muslim/Asian girls and boys rather than girls, the narrative of Muslim patriarchal violence against women is likely to be positively harmful.) Far more important are (eg) issues such as listening to women (and boys), following up evidence. These are pretty clear lessons that have come out again and again in the various permutations of the child abuse scandals that have come up over the years, and some are merely straightforward issues of traditional good police practice. Secondly, it's not surprising that child sexual abuse is so difficult to deal with. Here, you are dealing with rape (never easy to prosecute), child witnesses (again, not easy to deal with in adversarial criminal system), and often issues of mental health and drug use (leading to obvious difficulties in credibility). That's not a complete excuse for failure, but it is an explanation of how failure took this particular shape (and why it's likely to be resistant to solution).

The overwhelming impression in reading the report is less one of a cover up of Muslim/Asian complicity, and just of the sheer hell that awaits those who fall out of protective social structures: basically, you'll be written off as vermin by those of us who are all right, and left to the mercies of the more violent among your fellow Lumpenproletariat. If race is an issue at all, it's because it made some officials tread carefully (hardly surprising if regrettable) and because it just seems to be a fact that the vast majority of abusers in this particular episode were Muslims of Pakistani origin. I'm not sure why this matters so much. Criminality often has some sort of cultural dimension. (Why was America dominated by Italian gangsters such as the Mafia?) Doubtless, there's some interesting sociology to be done here. But in the meantime, such speculations seem entirely irrelevant to struggling with identifying and successfully prosecuting crime.

So I disagree profoundly with (eg) Melanie McDonagh:

But, as the report on abuse in Rotherham makes embarrassingly clear, the ethnic character of the predation was the reason why the initial police report was simply stuffed under the sofa (and in passing, this oversight shouldn’t be investigated by the same force that perpetrated it).

I've read the report a few times now and -allowing for having missed something in its 159 pages- I don't see anything of the sort made 'embarrassingly clear'. (If someone wants to point out the relevant paragraphs, I'd be grateful.) Certainly, the ethnic character of the predation was played down (and should it have been played up? difficult to get the balance right) but the real problems seem to be elsewhere. She goes on:


When the issue was abuse in the Catholic Church, the church underwent prolonged soul searching about the background of individuals accepted for the priesthood and about the requirement for priestly celibacy (though the issue was power, not celibacy). In England, the church commissioned the Nolan report on child protection, which was a model of its kind.

When it came to the abuse of minors by celebs like Jimmy Savile, we examined our collective conscience about the cult of celebrity and the immunity it seemed to convey to those in that bubble; we’re still agonising about it.

I'm not convinced by either of these. To take celebrity culture, how's that 'agonising' going? (Have the Kardashians disappeared? Have pop musicians disappeared into the anonymity of mediaeval craftsmen?) On the Catholic Church, the main advance has not been so much a conclusive analysis of the causes of the abuse (what would that look like? Instead you have the sort of 'combox punditry' convinced that it's all the fault of celibacy, analogous to that attributing all fault to macho Islam) so much as the systems needed to prevent it: the sort of dumb, conservative 'how to catch them and lock them up' sort of response I'd suggest.