Enoch was right and doing something about Islam 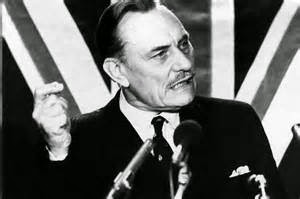 I'm surprised no one (or at least no one I've come across) has yet said it, but let me be the first: Enoch was right.

Having said it, let me add that I don't mean it: I actually think he was profoundly wrong. But it's probably worth saying it out loud, because large numbers of commentators are muttering things about Islam that are very hard to understand in any way other than words disguising the thought too terrible to utter explicitly: that Enoch Powell was right in warning about the dangers of immigration, particularly Muslim, and we must now do something to prevent the rivers of blood he predicted -if indeed there is still time. And now that line of argument has been brought into the air, let's dispose of it.

There's an argument to be had about immigration whether past or future. But let's put that aside. Even if you closed the gates tomorrow, there are going to be many people within this country of the Muslim religion (2.7 millions) most of whom will be British citizens born and raised here. (And if any one is wondering why I'm focusing exclusively on Islam just now -please don't be silly.)

Now, these are people with human and legal rights and, just more generally, a right to respect as persons. (This really ought to be bread and butter stuff for Catholics. Anyone else can just accept it as a statement of my starting point.) So there can be no question of 'sending them back where they came from' or making them disappear in some unexplained way, and that means there are going to be large numbers of Muslims in the UK for ever. So whatever doing something about Islam might mean, it can't mean getting rid of Muslims. (I think we ought to be profoundly shocked by the very idea, but there is wild talk out there.)

So presumably it means changing them in some way. Multi-culturalism is its loony sixties best was founded on the thought that, deep down, we all agree, and that having different religions is merely a matter of exchanging samosas for Scotch pies: cultures were all beautiful and all mutually fertilizing. Any 'odd' traditional practices like sexism would disappear under the benign influence of the Western sun, and we'd just be left with all the nice, entertaining colourful differences. As such, multic-culturalism was really a variety of the secularisation thesis: that modernity would lead inevitably to a reduction in religion. Either way, any unfortunate aspects of other cultures or religions would be smoothed away over the generations in the West.

Well, no. And because that doesn't seem to have happened naturally, we now need (so the story goes) to do something about it, by, for example, getting them to adopt wiser, British values. The problem with this is twofold. First, there is the question of practicality. If we have abandoned the secularization thesis that modernity will do its work without any help, there are very few plausible mechanisms for enforcing religious change. If we knew how to mould people religiously, believe me, the Vatican would be far more successful in retaining Catholic children in the Church. To take a specific example which I have spent a great deal of time blogging on, the attempt to clamp down on the influence of parents in the 'Trojan Horse' schools a) cannot have any relevance to current radicalized adults since the supposed Islamicization of the schools has only taken place in the last few years; and b) is just as likely in my view to promote further radicalization by alienating (conservative but peaceful) Muslims from the education system and the state. Secondly, there is the question of what values we mean them to adopt. Do they have to be sexually licentious for example? Must they drink? Are they allowed to accept traditional understandings of Islamic punishments, or do they have to adopt some sort of liberal Protestant figurative interpretations? (And if the later, by what mechanism do we get current Muslim authorities to teach these revisions?)

Again, much muttering and very few explicit statements in this area, but there does seem to be widespread view that Islam as an intellectual/cultural system is inevitably prone to producing offshoots such as ISIS: in Gove's words, we need to 'drain the swamp'. But people are not mud: what is a mechanical action in drainage, becomes that chimerical goal of a sure way to change people's minds: we cannot (should not) stop people from being Muslims and we cannot (should not) stop the values of that religion from challenging certain 'British' values. Moreover, we cannot control the shape of Islam: it has its own history, its own depths which go beyond the control of governments or schools.

But we must do something. Surely? Well, it's worth considering the possibility that we should do absolutely nothing or at least very little. Part of the problem here are emotional associations between different problems. There is undoubtedly a geo-political/foreign policy problem with ISIS. There is undoubtedly a moral problem with regard to the fates of Christians and other minorities in Iraq and the rest of the Middle East. There is undoubtedly a problem in Gaza and Israel. (And so on.) Some of these can be helped. Some possibly cannot. But I put those foreign aspects aside. There is no direct link between these and the 'problem' of Islam at home.

So what is the 'problem' of Islam at home? That a few hundred youths have gone off to fight? Not new and, whilst regrettable, of no real effect on the Middle East. (By all means use military force and the criminal law to punish the guilty and preserve the innocent -but here, either we are in the area of the marginal (how to treat a few criminals) or the area of foreign policy again.) That the fighters may come home as terrorists? A real issue, but one that can only be dealt with by police measures or personal engagement with the returners. (And even if, per impossibile, we could ensure that no British youths fought for ISIS, this wouldn't remove the threat of Middle Eastern terrorism hitting our shores.) I think these are genuine problems but are of the sort that can only be dealt with as part of an ongoing security awareness in a dangerous world: the main driver for a terrorist threat against the UK is the unstable state of the Middle East, and the solutions there are extremely unclear. There is a general historical lesson here that each generation needs to remember: most people don't think like you and some will try to kill you.

Back to 'draining the swamp'. Part of the inchoate, vague sense of 'something must be done' is that Islam represents a threat to 'British' values, not so much through violence, as through its very presence. I think the main response to this is agreement: of course it does. That's what democracy means. If large numbers of people think a current aspect of British life is wrong, it is, ceteris paribus, liable to be changed in a democracy. There is absolutely no guarantee that, in one hundred years, our country will be dominated by the same values it has now. If you think that, despite the comparative smallness of the Muslim vote and cultural weight, it might in future be able to exert more influence, then, unless you are willing to do something about Muslims, you are going to have to accept that possibility.

To dig down into the range of issues a little more here, if British values are just the preservation of a snap shot of British culture now, then they are clearly not going to be preserved: the snapshot will change. If it means preserving a subset of 'key' values, then much depends on what those key values are. Roughly, we might distinguish between the political liberal values (say, representative democracy, an independent judiciary and the rule of law, freedom of speech etc etc); and the ethical, substantive values of attitudes to sex, family, religion, art etc etc. I don't see any particular reason why the first class couldn't be preserved simply on the grounds of effectiveness: almost any society works better with such structures. But there is certainly no way that a society with a greater traditional Islamic influence upon it would have the same attitude to the ethical issues I've mentioned. And of course it's precisely those issues that many moderns are obsessed about: if you are a feminist, for example, the structure and ethos of the family is not so much just one more item up for negotiation over the years as the very heart of political life. And it's precisely these 'non-negotiable' issues that are most likely to be negotiated in a society with a lively Islamic contribution.

As a Catholic, I have no doubt that society would be better run with a Catholic view on those ethical, substantive issues. But equally, I accept that I can only do my best to persuade others and utilize my rights to preserve what I can of the best life within my own private sphere: I cannot (indeed have not been able to) stop others, unpersuaded of my views, making use of the political values to support their (wrong, I believe) view of the ethical values. Equally, in the future, there is nothing that I (or they) can do to guarantee that Muslims will not influence ethical values in ways that the currently victorious progressives will dislike. If they (and I) want to do anything about preserving what the correct ethical, substantive values are, then we need to fight the culture wars (or, more pacifically, defend our view of the correct nature of human flourishing and seek to persuade (not compel) others). The outcome of that dialogue is indeed not certain.

Back to Enoch. He was right, I suppose, to see a threat to British values from immigrant communities: to substantive ethical British values rather than political ones (to use that rough and ready distinction). Whether that is a good thing or a bad thing is almost irrelevant: it is simply a fact that is not going to change. (I can't resist pointing out, however, that the major change in (destruction of) ethical British values from those (say) of the fifties to those of 2014 has been nothing to do with Islam and everything to do with Powell's cronies in the existing educational, political and artistic (native) elites.) I see every reason to be optimistic that the political values can survive over the future. Or, to be more precise, I see rather less threat from Islam in this direction than I do from progressives who wish to impose their views of human flourishing on everyone at the expense of freedoms of speech and family life.

To finish, let me put all this from a more positive direction. I think a Britain (or Scotland etc) with a politically active Islamic population challenging the ethics and aesthetics of our current society within the peaceful political values I've sketched above would be a better place than it is now or was with Enoch. Not only would Muslim youths find themselves with a better struggle in which to channel their young energy, but the critical edge provided by such a critique would mean that Britain might arrest some of the cultural decline that was presided over by a predominantly  white, male and aboriginal elite.