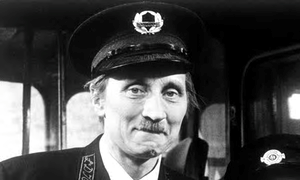 Stephen Dorril's 2006 biography of Oswald Mosley contrasts with Skidelsky's earlier book (and unsurprisingly with Mosley's autobiography) in giving a thoroughly unfavourable portrait of Britain's lost fascist leader. Although it's been a long while since I read the latter two works, Dorril's interpretation of Mosley's life undermines claims of his economic expertise and general intelligence, quite apart from presenting his character as one of a complete cad. (Personally, I find it convincing.)

That said, I think it does still suggest that one of the keys to understanding Mosley was his attempt to solve the problems of unemployment and poverty by means of decisive action to impose (broadly) Keynesian solutions. And at root of this attempt is a very current political problem: how to generate a sufficient popular enthusiasm for that driest of dry things: an imposed, technocratic solution to economic problems. Despite Dorril's rather detailed undermining of any claim that Mosley was just an anti-Semite by convenience, the established view that this was a large part of his anti-Semitism survives:

Writers on British fascism vary from the soft-hearted Lord Skidelsky to tough-minded researchers from the East End. On one point, they agree: Mosley's decision to play the race card was entirely cynical. He may have bent the knee to Hitler and Mussolini, but he wasn't more or less racist than any other member of the aristocracy. He embraced anti-semitism as it was the best way to appeal to the East End voters he thought would propel him back to the people around him, Mosley was never a convinced racist,' said Francis Beckett, the best of the tough-minded historians. 'Needless to add, that doesn't mean that he was better than them.'  [Nick Cohen here]

Putting aside the detailed examination of Mosley's actual motivations here, in principle, it is entirely plausible that someone trying to sell politically technocratic and elitist solutions to complex problems would try to link them to rather more exciting activities such as racism, marching up and down and street fighting. If Mosley's own motivations were perhaps not entirely so clear sighted, it would be perfectly reasonable to invent someone whose motivations were... 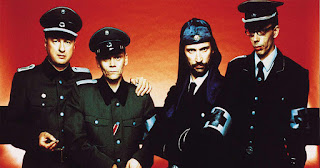 To the extent that I understand Zizek (and I'd admit that's to a very limited extent indeed) part of his fascination with the bands Rammstein and Laibach rests on their using Fascist appearances for 'progressive' purposes:

"They’re very hard - I think they’re extremely progressive. It’s totally wrong to read them as almost a proto-fascist band. My god, they explicitly supported Die Linke, the leftists there, and so on. I like their extremely subversive from within, undermining of all this - you know? Like, it gives me pleasure. Psychologically I’m a fascist - everyone knows it, no? Who published this - Daily everyone knows it, no? Who published this - Daily Telegraph? That jerk who pronounced me a leftist fascist, you know? Alan Johnson or who? So - I mean - I think we should take over these - all of these - authoritarian gestures, unity, leader, sacrifice, f*ck it! Why not? No? So, Rammstein are my guys." [Zizek here]

“The minimal elements of the Nazi ideology enacted by Rammstein are something like pure elements of libidinal investment,” Slavoj Zizek informs us in the documentary film The Pervert’s Guide to Ideology (2012) as frontman Till Lindemann goose-steps across a stage. “Enjoyment has to be, as it were, condensed in some minimal ticks, gestures which do not have precise ideological meaning. What Rammstein does is it liberates these elements from their Nazi articulation. It allows us to enjoy them in their pre-ideological state. The way to fight Nazism is to enjoy these elements, ridiculous as they were here, by suspending the Nazi’s horizon of meaning. This way you undermine Nazism from within." [Here]

The detachability of Fascist spectacle from Fascist policy is, in essence, Mosley's cynicism: the attachment of 'libidinally invested' fashy elements such as para-militarism to technocratic economics is an attempted solution to get popular buy-in to necessary, but unexciting policies.

I'm not really interested here in arguing that modern progressives are Fascists or even 'fashy', although I do think they have at the least attached enjoyable 'authoritarian gestures' to socialist substance. My main point here is that progressivism quite recently seems to have imitated a genuine Fascist (Mosley) in attaching erotically charged elements to dull, technocratic ends. Even if those elements are not always the same as Mosley's, they do resemble his in their function: to make technocracy fun.

[An afterthought: traditional blood and soil nationalism need not anathematise other nations. A love of one's own home and culture is entirely compatible with an cknowledgement that others have their own homes and their own erotic commitment to them. Civic nationalism on the other hand is predicated on our being good people and our opponents being bad people. Liberation from a controlling power in the first case in principle at least ends the hatred of the imperial nation; in the second case, the imperial power remains, no longer an oppressor perhaps, but still bad people full of bad habits. To be concrete: in the eyes of progressive nationalists, if Scotland were ever liberated from England, England would remain full of cruel toffs, intent on starving the poor and destroying foxes and the NHS.]