Binyavanga Wainaina and being gay 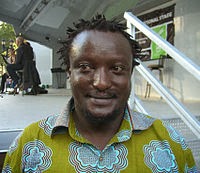 The Kenyan writer, Binyavanga Wainaina, has received praise for his moral courage in 'coming out':

Mr Wainaina, one of Africa's leading literary figures, outed himself via a short story titled I am a Homosexual, Mum in which he imagined telling his mother on her deathbed that he was gay. "Nobody, nobody, ever in my life has heard this," Mr Wainaina wrote. "I did not trust you, mum."

One of the responses noted the lack of comments and speculated the reason for this 'was that even on CiF, no one wanted to be a dick enough to snipe at what he said'. Well, always up for a challenge...

Of course, there is much here that might be moving and interesting and courageous. There is the all too human story of not being with a parent on her deathbed. There is a story of exile from one's native land. There is the story of how our communication and self-revelation to parents is never adequate (and one might add, that of parents to children). There is a back story no doubt about deracination and validation by the West as an African writer is taken up and anointed as an African writer by academic awards and fellowships in western institutions. There is probably a story about how being gay in South Africa is not like being gay in Kenya. There is certainly a story about a wave of anti-homosexual legislation in Africa.

But let's just focus on the story: the actual short story. And let's put aside the question of courage and focus more on comprehensibility. The key moments are perhaps these:

I am twenty nine. It is 11 July, 2000. I, Binyavanga Wainaina, quite honestly swear I have known I am a homosexual since I was five. I have never touched a man sexually. I have slept with three women in my life. One woman, successfully. Only once with her. It was amazing. But the next day, I was not able to.

It will take me five years after my mother’s death to find a man who will give me a massage and some brief, paid-for love. In Earl’s Court, London. And I will be freed, and tell my best friend, who will surprise me by understanding, without understanding. I will tell him what I did, but not tell him I am gay. I cannot say the word gay until I am thirty nine, four years after that brief massage encounter. Today, it is 18 January 2013, and I am forty three.

I am five years old.

He stood there, in overalls, awkward, his chest a railway track of sweaty bumps, and little hard beads of hair. Everything about him is smooth-slow. Bits of brown on a cracked tooth, that endless long smile. A good thing for me the slow way he moves, because I am transparent to people’s patterns, and can trip so easily and fall into snarls and fear with jerky people. A long easy smile, he lifts me in the air and swings. He smells of diesel, and the world of all other people’s movements has disappeared. I am away from everybody for the first time in my life, and it is glorious, and then it is a tunnel of fear. There are no creaks in him, like a tractor he will climb any hill, steadily. If he walks away, now, with me, I will go with him forever. I know if he puts me down my legs will not move again. I am so ashamed, I stop myself from clinging. I jump away from him and avoid him forever. For twentysomething years, I even hug men awkwardly.

There will be this feeling again. Stronger, firmer now. Aged maybe seven. Once with another slow easy golfer at Nakuru Golf Club, and I am shaking because he shook my hand. Then I am crying alone in the toilet because the repeat of this feeling has made me suddenly ripped apart and lonely. The feeling is not sexual. It is certain. It is overwhelming. It wants to make a home. It comes every few months like a bout of malaria and leaves me shaken for days, and confused for months. I do nothing about it.

I am a homosexual.

Now, I confess that I struggle to understand quite what is going on here. I think I'm meant to understand this as some primeval revelation of his homosexuality: the intensity of the male bonding as evidential of his nature. Except that I could probably write something similar and I suspect most other male heterosexuals could too: a child's feelings for male, parental, adult figures can be quite intense. (Many of us also masturbated a lot and read books.) On the other hand, perhaps it's the very normality that's meant to be revelatory: the poignancy of the intense inner life of a child that can never be shared with a parent. And thus a Shylockian moment: I am a homosexual and I too bleed if pricked/have an intense inner life.

We think we know what's going on here, but really all we know is that he knows, at five, he's homosexual. And despite all the emotion that are flying around, I'm not at all sure that the mechanism of that knowledge -how he knows- is any clearer at the end than it was at the beginning. (Perhaps that's the point? The smell of diesel. The firm handshake. Certain, powerful intense images: as certain and intense and primitive as the datum that I am gay.)

I confess to having a long standing problem with such narratives. When someone tells me that they have known they were gay since five or seven, I have no idea what to make of it. I certainly didn't know I was heterosexual at that age. I didn't know what a heterosexual was at that age. I was distinctly wonky on the precise details of copulation and the idea that one might find girls attractive was utterly bizarre. When someone tells me that they have always known that they were going to be an opera singer, or a writer or a doctor, I silently translate that as having had a strong desire plus some family or social reinforcement: I certainly don't think that such a claim is an unproblematic revelation of their true nature. If someone tells me that they discover they were gay over a long period of struggle and reflection during their adolescence, then, although I'd be interested in learning some more of the details, in principle, I can understand what they're talking about: most of my commitments and self-knowledge were built up over a similar period.

But at five? I really have no idea and the short story throws absolutely no light on it. That doesn't mean I absolutely dismiss the claim: people are indeed very different and sometimes very, very different. Yet the more the insistence on such unproblematic early certainties, the more either homosexuality sounds less like a human variation and more like some alien, incomprehensible  intrusion into human life; or the more it sounds like the product of bad faith and an ideologically motivated narrative intended to prove we were born this way...