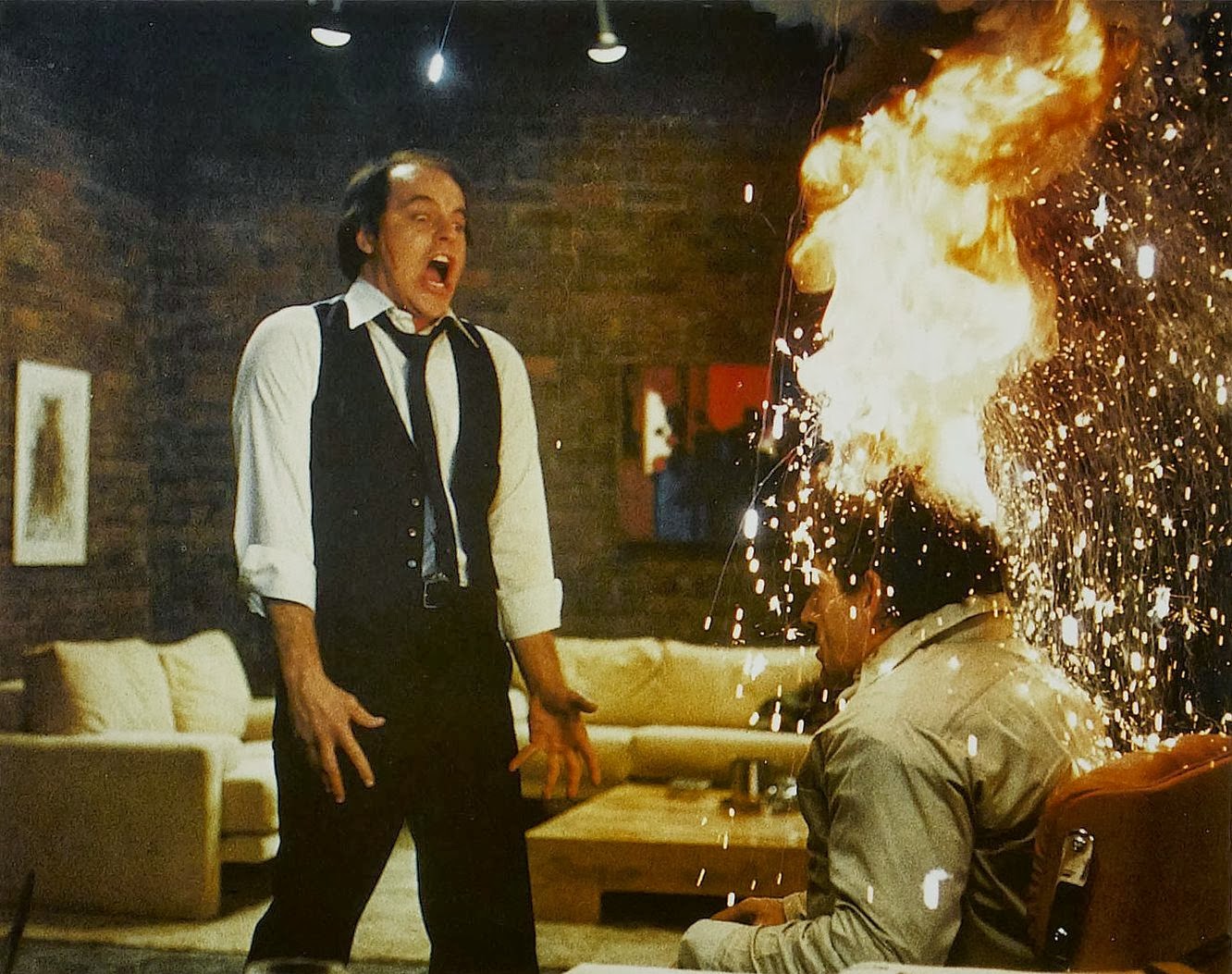 Robin Ince is so bright occasionally his head explodes

The comedian Robin Ince is apparently one of those New Atheists/Secularists that thinks being rational is simply a matter of saying you're rational ninety-nine times before breakfast:

I think it is a pity to live your life in ignorance and embrace that ignorance - for instance with ideas like intelligent design. We live in a world that is entirely powered by reason: everything in your office and my house exists because of reason. It is a very odd world where people reject reason and yet benefit from the riches of reason. [Here.]

Frankly, being stuck in a room with Robin Ince sounds rather like being buried alive: I'd probably wear my fingers down to the wrist trying to escape. As a comedian, I suppose we should expect his views to be striking rather than well thought through. But still. (And what's with his house? Mine is stuffed full of children and a wife and pets and art that arrived more by grace and imagination than reason. Does Ince eke out his wretched existence surrounded only by kitchen utensils?)

Anyway, Cristina Odone and he have been exchanging views in the New Statesmen. Odone, having complained that Christians are being driven out of public life, is criticized by Ince on the grounds that she's merely complaining about Christianity's losing its 'unfair advantages' [here]. As his article typifies a lot of the knee jerk reactions of New Atheists/Secularists, it's worth pulling apart a little more. (All quotes from the article.)

she has not lost the right to preach her beliefs or practise them. She regularly gets to preach her beliefs in the Daily Telegraph and – like many rabbis, imams and pastors – on television and radio, too. Religious leaders frequently appear on the BBC, that broadcasting network of the state oppressor.

As for practising her beliefs, Odone can do that, too. Same-sex marriage is not compulsory; it is very much an opt-in scenario. Cristina Odone will not be forced into a lesbian coupling, nor will she be forced to have an abortion – nor, should it become law, will she be made to embrace assisted dying, even if her death is agonising and the pain impossible to relieve.

Simply because Ince can point to some (comic and irrelevant) areas where Odone can practise does not mean that there are other (serious and relevant) areas where she cannot. But even in those areas he mentions, it's not clear that she can practise. Evander Holyfield cannot, for example, say that homosexuality is not normal on TV. If euthanasia becomes part of treatment in this country, alternative, costlier treatments will disappear: the pain will become impossible to relieve because no one will bother relieving it. (Much easier to bump Cristina off.) Ince will undoubtedly believe that this is simply the exchange of a right to be foolish with more rational behaviour. Perhaps. But it certainly isn't an increase in negative freedom: the opportunity to perform different actions will be diminished. At the very least, the worry that freedom to practise will be diminished is a perfectly reasonable one.

Moreover, the case that Odone specifically mentions -the refusal by various venues to host a conference on traditional marriage- isn't denied by Ince. Instead, he seems to think that it doesn't count in some way:

Whether you agree with diversity policies or not, you can see how Christian Concern’s “sober” discussion of marriage might have made the management a little edgy. I, too, do not have a given right to perform at any venue. A venue can say “no” to me on grounds of my opinions, but not on the grounds of my faith, race or sexuality. The venues’ uncertainty was not about hosting Christians; it was about hosting a political event covered in religious fairy dust.

The trouble is, of course, that Christianity is politics covered in religious fairy dust: Christians believe in certain moral and social arrangements and are enjoined to try to achieve them. If we cannot even advocate them, that simply is a restriction of negative freedom. Ince should admit that, and then argue that such restrictions are a good thing.

Ince's view is summed up in the strapline to his article:

Cristina Odone confuses a loss of advantage with an act of oppression. This is the shock of those who are losing their divine right to dominate.

There is some truth in this. Christians see a culture that was modelled on the Judaeo-Christian ethic switching to something else. That does not result in a shock at losing the divine right to dominate, but a shock at losing a coherent and true world view for something that is neither: the shock is not at the loss of power but at the loss of something that we believe to be true and good. Would Ince, for example, sum up rejection of Russia's laws on homosexuality as 'the shock of those [ie atheists] who are losing their divine right to dominate'? It is rather the shock at the introduction of a law they believe to be wrong. Loss of truth is not the same as loss of power.

Ince's worldview seems to be composed of two elements. First, there is an absolute faith in the rationality of his own Atheism and in the fideist basis of Christianity: there is no point in including Christianity in social debates because it is simply irrational nonsense. Secondly, there is a view of public debate as a struggle between groups rather than a struggle between arguments and ideas. If Christians have bishops in the Lords, that is an unfair advantage for that side rather than an attempt to stimulate discussion beyond the narrow confines of party politics and fashionable nostrums. In reality, the surviving 'privileges' of Christianity in the public sphere are less advantages for power hungry groups of Christians, and more wildlife sanctuaries for endangered ideas surrounded by the crass superficialities of political debates where comedians are taken seriously.