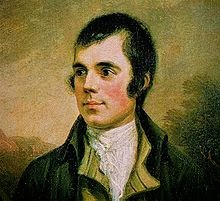 I hope you all have your haggises purchased...? Child 1, who is resident in partibus infidelium (ie England) tells me that they can be ordered frozen from Tesco's, rejecting the tinned varieties even though I'm personally quite partial to the curried haggis from Grant's:

You really need to have a slight hangover to enjoy it properly...

Anyway, my current obsession is the way Secularists (ie New Atheists with a political agenda) tend to appropriate history, and particularly the Enlightenment. More of this, no doubt, in the future. But a local instance of this is how Burns is roped into the anti-religion, Secularist camp. Now I'm certainly not going to pretend that Burns was either a crypto-Papist or even a particularly devout Presbyterian. Much more plausible is that he fits into that pattern of Deism, not in the sense of the 'watchmaker-who-made-the world-and-then-walked-off' deism (although even that is many miles away from atheism particularly in its New Atheist variety), but rather (in broad terms) rational religion:

The deist instead relied on those truths which, it was claimed, prove their accord with universal human reason by the fact that they are to be found in all religions, everywhere, at all times. Therefore the basic tenets of deism—for example, that there is a deity, discoverable by reasoning from the creation to the creator, who deserves our worship and sanctions all moral values—were, in theory, the elements shared by all particular, or "positive," religions. Many thinkers assimilated aspects of deism while remaining professing Christians. [Here.]

This is not the place for a detailed exploration of the relationship between such deism, atheism and Catholicism, but it's worth remembering that, when you hear Secular Scotland and the like prattling on about excluding religion from the public sphere, such a deist would regard an exclusion as leaving a public space ruled by a God who should be worshipped and obeyed -and it is that sort of divinely ordered public space which actually produced whatever liberties and rational institutions we possess, rather than the religion free wasteland of which New Atheism dreams.

Anyway, let's leave it to Burns:

With all my follies of youth, and I fear, a few vices of manhood, still I congratulate myself on having had in early days religion strongly impressed on my mind. I have nothing to say to any body, as, to which Sect they belong, or what Creed they believe; but I look on the Man who is firmly persuaded of Infinite Wisdom and Goodness superintending and directing every circumstance that can happen in his lot - I felicitate such a man as having a solid foundation for his mental enjoyment; a firm prop and sure stay, in the hour of difficulty, trouble and distress: and a never-failing anchor of hope, when he looks beyond the grave. [Here.]

A Prayer, Under the Pressure of violent Anguish

O Thou Great Being! what Thou art,
Surpasses me to know:
Yet sure I am, that known to Thee
Are all Thy works below.

Thy creature here before Thee stands,
All wretched and distrest;
Yet sure those ills that wring my soul
Obey Thy high behest.

Sure Thou, Almighty, canst not act
From cruelty or wrath!
O, free my weary eyes from tears,
Or close them fast in death!

But if I must afflicted be,
To suit some wise design;
Then man my soul with firm resolves
To bear and not repine!