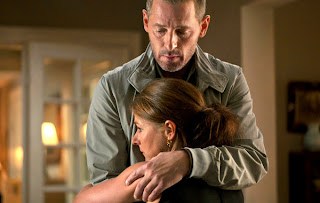 Part of the fascination of the series is seeing what government in a small country is like. Anyone with even a remote sympathy with Scottish independence is going to look at this series and start thinking, 'Hmm, could Holyrood look like that after 2014?' (And if so, is that a good thing or a bad thing? Are we, for example, really desperate to achieve those heady heights of international influence that lead Denmark, after the first episode of the new series, to have a Commissioner in charge of what seems to be the EU equivalent of the Ministry of String, the Commissioner for Multilingualism?)

Anyway, as usual, the game of musical chairs that is Scandinavian family life continues apace. The only person with what seems like a traditional family life of one wife, children and grandchildren (and even this is narrated, not seen) is Bent Sejrø, a political dinosaur who is of the previous generation to the Prime Minister, and who anyway has a stroke at the end of the second episode. Everyone else is wandering around finding it difficult to square working life with relationships, and hopping to a new partner (or in the case of one older female journalist, the bottle) if the going gets too tough.

As I discussed in a previous post, the husband of the PM, Phillip, is still behaving like a complete plonker. And still, no one seems to notice. A running thread through the first episode was the claim, 'Sometimes, we all have to do things we don't want to do', a truism first uttered by the self-serving Phillip to the PM when he was trying to get her to sign the divorce papers despite her crying and saying that she didn't want their marriage to end.

Had Borgen been written by an orthodox Catholic scriptwriter, this is what would have happened. Birgitte, the PM, would have thrown a conveniently large, leather bound (aptly named) missal of the sort easily found in Catholic homes at Phillip and told him to get his act together. Instead of sobbing rather wetly on his treacherous shoulder, she'd have screamed at him a reminder of his marriage vows and the hellfire awaiting him if he broke them. He, having conducted his daily examination of conscience, would have realized his fault, made things up with Birgitte, and dashed off to confession as soon as possible. (Since she chucked a missal, she'd probably be well advised to check into the confessional as well, even though I suspect at worst it would be a venial sin and probably just a well justified instance of righteous anger.) Happy ever after. Simples.

Instead, we're left with Birgitte sniffing the pillow of her absent son, as he has asked to stay with his father rather than her.

[Spoiler alert: if Wikipedia is right, this series might end on a slightly more optimistic note for the marriage. Good. But it shouldn't take 10 episodes for Phillip to have a little bit of a rethink. Come on, man, Denmark and the sanctity of marriage both need you now!]
Posted by Lazarus at 00:00