Church of Scotland gets it wrong on homosexual ministers 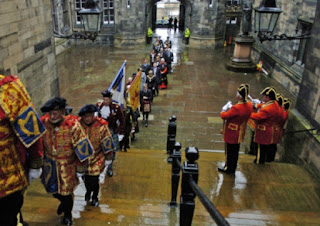 She marched them up to the top of the Mound....

From a Catholic point of view, it's difficult to know quite what to say about the Kirk's decision to allow actively gay ministers.

The nasty, unecumenical side of me wants simply to say, 'What do you expect? If you abandon Catholicism for some fantasy about sola scriptura, this is what you end up with.' The rather more charitable side of me wants to note, both that this seems to be a genuine attempt to hold the national church together in the face of probably irreconcilable tensions, and that a large minority of Presbyterians have retained a sold grasp of scriptural truth. Overall, it's just a shame. Scotland could do with a clear voice from Presbyterianism which can offer an authentic challenge to modern fashions: it's not been getting it for a while from the Kirk, and nothing about this week's decision will change that for the better. Perhaps the main hope will be that the inevitable exodus from the Church of Scotland will invigorate the Free Church of Scotland.

What Monday's decision does do, however, is to confirm a secular narrative that a) religion is just based on arbitrary beliefs; and b) those arbitrary beliefs can be changed by some sort of democratically appointed body. This leads to the expectation that it is only a matter of time before the Catholic Church starts listening to its members and then changes its views.

Dream on. Although I think it's probably fair to say that most serious Catholics and Evangelicals have more respect for each other today than used to be the case, scratch the surface and deep differences remain. Crudely, for Catholics, authority comes from Christ and passes down through the bishops gathered round the Vicar of Christ, the Pope. For Protestants, authority comes from an individual's encounter with Christ particularly in scripture. There's a secular belief that Popes just make up stuff: if the Pope says so, it is so. This leads to an expectation that, if you could just get some more democratic replacement for the Pope -a sort of Catholic General Assembly- the Catholic problem would be solved because, when he/they made up stuff in the future, it would be the sort of stuff that more accurately represented what we, the ordinary Catholics believed.

Well, as I said, authority comes from the Pope and bishops, not from ordinary Catholics: they have the Magisterium, the teaching authority from God; we don't. So nae chance of democratizing that. And the Magisterium doesn't just make up stuff:

2033 The Magisterium of the Pastors of the Church in moral matters is ordinarily exercised in catechesis and preaching, with the help of the works of theologians and spiritual authors. Thus from generation to generation, under the aegis and vigilance of the pastors, the "deposit" of Christian moral teaching has been handed on, a deposit composed of a characteristic body of rules, commandments, and virtues proceeding from faith in Christ and animated by charity. Alongside the Creed and the Our Father, the basis for this catechesis has traditionally been the Decalogue which sets out the principles of moral life valid for all men.

2034 The Roman Pontiff and the bishops are "authentic teachers, that is, teachers endowed with the authority of Christ, who preach the faith to the people entrusted to them, the faith to be believed and put into practice."76 The ordinary and universal Magisterium of the Pope and the bishops in communion with him teach the faithful the truth to believe, the charity to practice, the beatitude to hope for. (Catechism.)

Even if the starting point of Catholic moral theology were 'made up' (it isn't), it has been elaborated over the years into a system which makes sense as a whole, which can be developed, but not changed simply because we suddenly think we've discovered a mistake that previous generations missed. So don't expect the Church, as has the Kirk, suddenly to decide it's been getting it wrong for the last 2000 years.

Moreover, in the specific area of sexuality, the Church's understanding is almost Freudian in the way it attributes importance to sex. Unlike secular understandings -where whom or what you like sexually is about as important as what flavour of ice cream you enjoy- what and whom we find attractive is seen as having profound theological implications, a tendency which, through the theology of von Balthasar and John Paul II, has, if anything, deepened over recent years. Sex isn't just a minor suburb of theology to be redeveloped on a whim, but something that goes pretty near the heart of the religion.

In short? Don't let the actions of the Kirk mislead you. Catholicism has very different ideas of authority and theology which will prevent anything similar happening. For the secularist, we may all be swivel eyed loons, but Catholics and Presbyterians are different types of swivel-eyed loons and we Catholics are incurable. Don't forget it.
Posted by Lazarus at 00:00