Islam and the Otranto martyrs 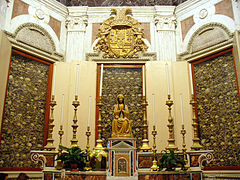 I am by inclination profoundly Islamophilic. There are a number of reasons for this. Most of the Muslims I've met on a personal or professional level have been rather decent human beings. I admire young Muslims' attachment to their religion. I'd like to have had the Arabic to trace back some of the development of Scholasticism to Jews and Muslims writing in the language. The Ottoman Empire strikes me as one of the more interesting historical periods. I am grateful to the Scottish Muslim community for standing firm with Catholics and Evangelical Protestants against same sex 'marriage'. We worship the same God. And so on....

In the West, the great threat to Catholicism is not, at least in the foreseeable future, from Islam, but from secularism/atheism in its drive to extirpate religion. Muslims and Catholics share much, a sharing evidenced in Scotland by the numbers of Muslim parents who send their children to Catholic schools.

So why upset a rather smooth running apple cart with the canonization of 800 Italians martyred by the Ottomans in the fifteenth century? NBC has a simple answer:


Ever since his election, Pope Francis has called for greater dialogue between Christianity and other religions, in particular Islam. And so far, he has acted on that promise. He washed the feet of a young Muslim woman jailed in a juvenile prison on Holy Thursday, and reached out to the many “Muslim brothers and sisters” during his first Good Friday procession.
So why risk creating yet another inter-faith row with a celebration which some in the Muslim world may be seen as a provocation?
The answer is that it wasn’t Pope Francis’ choice in the first place. The decision to canonize the hundreds of Otranto martyrs was rubber-stamped by his predecessor, Pope Benedict XVI, on Feb. 11 - the same day he announced his resignation.

Quite apart from the fact that it's now obvious that Francis, although clearly a very different personality from Benedict, is as committed to Catholic orthodoxy as you'd expect any Pope to be, my take on canonization is relatively simple: if someone is obviously a saint, he should be canonized, regardless of 'political' considerations. The Church deals in facts, not in conveniences, and if the martyrdom of 800 Italians is inconvenient, that's probably not a bad thing anyway. (Similarly with Oscar Romero: it doesn't matter whether he is the poster boy for Tabletistas or not, all that matters is whether or not he is a saint.)

In some ways, of course, the canonization is entirely convenient. Christians in the Middle East and elsewhere are being martyred by Muslims. In Western Europe, even if no one is threatening to decapitate us, Christians need to be reminded that, in the face of secularist pressure, in some circumstances we are called on to sacrifice everything rather than abandon Christ.

Islam and Catholicism are in some ways allies in the West and in some ways rivals. As new generations experience the emptiness of atheism, they will seek religious answers, and Islam will offer those if Catholicism has given up its hunger for saving souls. (I've just downloaded to my Kindle, Kristiane Backer's From MTV to Mecca, which is the autobiography of just such a convert from Western secularism to Islam.) That 800 very ordinary Italians were willing to die rather than convert ought to shame the Laodiceans among us. On the other hand, an obsession with Islam in Western Europe is an obsession with a possible future threat rather than the immediate one of atheism. But in either case, the answer is the same: a reinvigoration of Catholicism. That is the message of Otranto, and it is one we should pay attention to, regardless of whether the threat is more from the Qur'an or from Nuts Magazine.