We need to talk about Keith... 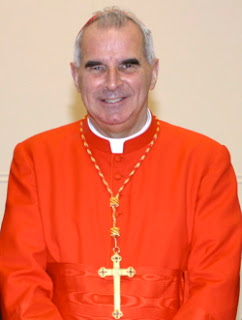 Of course, it's all a lot more difficult than that in practice, particularly with an organization such as the Catholic Church where, despite the form of hierarchy, there are really many competing levels of authority which can get in each other's way when there is a need for strong action. And the Catholic Church doesn't really do media, partly from the bad reason that it's not really got much competence in that area, and partly from the good reason that it doesn't think keeping the chattering classes (or even the Jeremy Kyle classes) up to date and happy is an important part of its mission.

So what is one to say about Cardinal O'Brien? First, I feel sorry for him and don't want to be vindictive. Sex makes fools out of many of us, and the pressures of public and priestly life can compound that. The Church has a responsibility to him for his welfare in this life and his salvation in the next. He shouldn't simply be hung out to dry to satisfy a crude need for scapegoating.

On the other hand, he has admitted there is some truth in accusations that include the wrecking of one man's priestly vocation and the abuse of power in positions of authority. How much truth, we don't know. But we do know that there are men out there who, with apparently good reason, feel ill used by the Cardinal. It's easy to feel sorry and supportive for the Cardinal because he's a well kent face. It's rather more difficult, but still absolutely essential, to feel at least a duty of justice to men who may well deserve the title of victims.

In some ways, ordinary Catholics don't need to have any view on this. Perhaps the Church should deal with the matter through its own disciplinary procedures and it's pretty irrelevant whether I (or other ordinary Catholics) know what's happened. The Church has no need to feed my prurient interest in gossip. But part of the vocation of the laity, made clear since Vatican II, is to take part in the mission of the Church. As the Catechism states:


The initiative of lay Christians is necessary especially when the matter involves discovering or inventing the means for permeating social, political, and economic realities with the demands of Christian doctrine and life. This initiative is a normal element of the life of the Church:

Lay believers are in the front line of Church life; for them the Church is the animating principle of human society. Therefore, they in particular ought to have an ever-clearer consciousness not only of belonging to the Church, but of being the Church, that is to say, the community of the faithful on earth under the leadership of the Pope, the common Head, and of the bishops in communion with him. They are the Church. (s 888).

I think it's pretty much within my responsibilities as a lay person to worry about the reputation of the Church both among Catholics and others. I am an expert on media, having assiduously watched day time TV during periods of unemployment and illness. So, although I think there is something to be said for the view that an overinterest in this sort of Church shenanigans is the result of that prurient interest in gossip that I mentioned, on balance, I think lay Catholics have a duty to be involved in suggesting to the Church, and to the Cardinal, how this matter and related matters should be treated.

On Cardinal O'Brien in particular, I think it's right that, at least in the short term, he should remove himself from Scotland and keep an extremely low profile. I would like the Vatican to pursue a quick enquiry and to make its results known. I would ask the Cardinal to be open and honest with that enquiry in order to speed the process. I hope that both his welfare and those of his accusers remains a major consideration in that process.

More generally, I think the Church (particularly in Scotland) needs to think about truth and truth telling in an age of lay involvement and the internet. I've been eavesdropping on (and reading along with) the Foucault discussion group's lecture by lecture investigation of Foucault's analysis of parrhesia  (or as he insists on spelling it, parresia). (H/T Quiet Riot Girl.) Pope Francis also used the word recently in a sermon. Straightforwardly, parrhesia is boldness in speech, but after it's been through the Foucauldian mill, it stands rather for that practice of truth telling in a public space by which one both constitutes oneself as a virtuous individual, and ensures the correct running of public affairs. (Well, that's what I've picked up roughly from Foucault! Disgruntled postmodernists can deconstruct me in the combox...) At the moment, the laity has a duty to contribute to the mission of the Church, but the conditions which would allow that parrhesia do not exist. Instead we have gossip. There are many blogs in the Catholic blogosphere which are basically powered by assertions of hidden knowledge and information which, by its very nature, cannot be verified. Trust me, I know, they say. But how do I know that you know....?

So the thought for today is rather less, 'What should we do about Keith?' but much more, 'What is required for the laity to engage in the practice of truth-telling in Catholic Scotland?' And that doesn't mean allowing whinge fests where theologically half literate former hippies go on about the need to have women priests and Tuc biscuits at Mass, or crazed Lefebvrists agonize about Masonic influence and the Protocols of the Elders of Zion, but much more about straightforwardness in acknowledging where things have gone wrong or out of control, and reflection on both what the laity need in terms of knowledge to exercise their vocation, and where that vocation slides over into the enjoyment of gossip and delusions of a prophetic office.