Derrida on same sex 'marriage' and the slippery slope 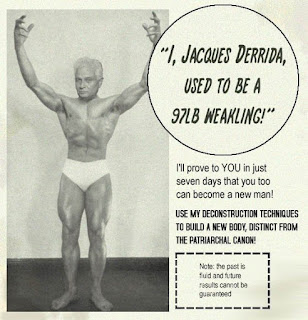 The admission by Lesbian activist, Masha Gessen, that the aim of same sex 'marriage' isn't so much about the access of homosexuals to marriage as the destruction of the institution did the rounds of the unenlightened-sky-fairy-worshipping-bigot-blogs recently.

It's worth reinforcing the point that this isn't simply the ramblings of one atypical activist, but a core view in the pro-SSM movement. Here's Suzanne Moore:

...any progressive would not waste time arguing the case for gay marriage. Quite the opposite. Instead, the right to civil partnerships should be extended to everyone, whichever bits of our bodies we chose to stick in other people's bodies.

Given its patriarchal history, I am no fan of wedlock....There are powerful arguments in favour of a broader, non-discriminatory, comprehensive, flexible system of partnership recognition and rights, covering gay and straight partners, and applying to all mutually caring relationships...Within our society we see a huge variety of relationships and lifestyles. There are people who live together, and those who live apart. Some share their finances; others maintain financial independence. The law should reflect and support these diverse relationship choices and realities. The one-size-fits-all model of relationship recognition - exemplified by marriage - is no longer appropriate.

In one way, there's not much point reiterating this again. It's one of those things that everyone knows to be true, but -except for the opposition to SSM side- no -one is willing to admit: as sure as civil partnerships led to same sex 'marriage', same sex 'marriage' will lead to the sacralizing of all 'diverse relationship choices and realities'. Still, the truth should be reiterated even if no one is listening.

All this was prompted by the purchase of the (relatively) newly translated biography of Derrida by Benoit Peeters. Haven't had a chance to read it yet, so can't comment on its quality (but it has lots of pretty pictures which of course is the main test of any biography of an intellectual) but I did find the following (pp531-2):

And when the journalist Élisabeth Lévy asked him, not without a hint of aggression, whether it was 'the same Derrida who had signed On Grammatology and the petition for gay marriage', he was not the least thrown off his stride, explaining that he had supported wholeheartedly the initiative of Noël Mamère but that, on a deeper level, he would like the word 'marriage' to disappear from the Civil Code, since the notion was in his view too tied to the religious sphere.

In his interview with Jean Birnbaum, Derrida went into more detail on this question: 'If I were a legislator, I would propose simply getting rid of the word and concept of 'marriage' in our civil and secular code. 'Marriage,' as a religious, sacred, heterosexual value -with a vow to procreate, to be eternally faithful, and so on-, is  concession made by the secular state to the Christian church, and particularly with regard to monogamy...By getting rid of the word and concept of 'marriage,' and thus this ambiguity or this hypocrisy with regard to the religious and the sacred -things which have no place in a secular constitution-one could put in their place a contractual 'civil union,' a sort of generalized pacs, one that has been improved, refined, and would remain flexible and adaptable to parties whose sex and number would not be prescribed.

Perhaps the Beastie Boys' Sabotage is the only appropriate way to comment on this. All together now:

I Can't Stand It I Know You Planned It
But I'm Gonna Set It Straight, This Watergate
I Can't Stand Rocking When I'm In Here
Because Your Crystal Ball Ain't So Crystal Clear
So While You Sit Backand Wonder Why
I Got This F****** Thorn In My Side
Oh My, It's A Mirage
I'm Tellin' Y'all It's a Sabotage