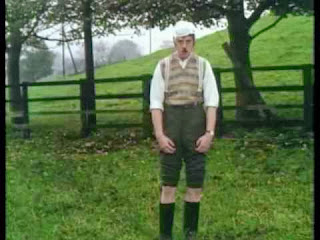 I have been thinking...

This is going to be one of those posts where I mull to no good purpose whilst sticking up some points so that I don't lose sight of them in the future. You have been warned....

I've previously mentioned my conviction that the most serious problem facing the Church is a lack of basic religious education. Let's split that into theological education and philosophical education. The absence of theological education can -to some extent- be remedied by using the Catechism. Either read it (and keep on reading it) yourself or do one of the numerous courses available on it. It's not  perfect solution, but at least it should stop most of the daftnesses of the 'It doesn't matter whether you go to Mass or not' and 'Vatican II abolished that' sort. (If you want a more straightforward summary without any concessions to modernity, keep a copy of either the Penny Catechism or the Baltimore Catechism as a back up.)

That leaves philosophical education. Well, OK, first question: why do we need philosophical education as Catholics? (And here I'm talking primarily about reasonably intelligent laity, not priests or religious.) Why aren't the above Catechisms enough? Roughly, this is because the theology of the Catechisms stands on philosophy: without that background, it is often reduced to simple fideistic statements. The Catechisms mostly sort out the what we believe; but they usually do not sort out the why, particularly that part of the why which is based on natural reason rather than revelation.

Catholic philosophy's status as the 'ancilla theologiae' (the handmaid of theology) is particularly important when we're dealing with a society that is post-Christian and post dead white males. The average (fairly intellectual) Victorian convert would have been a Christian of some sort with a background in Greek and Latin literature: to someone who is worrying about whether to be a Catholic or an Anglican or even a Platonist the sort of material in the Catechism is probably going to be most important. The average (fairly intellectual) modern convert probably thinks that Xena Warrior Princess is genuine history (or at least a genuine post modern jouissance) and that Galileo disproved Aristotle by dropping him off the Tower of Pisa. Nothing in the Catechism is (directly) going to touch  that sort of worldview. (And note that this isn't just a matter of apologetics: what is played out in a public space between individuals has its analogue inside the mind when individuals wonder if Catholic teaching makes sense to them: not only will converts fail to be made, but practising Catholics will start to believe that individual doctrines -or even the whole system- fails to make sense.)

Without a background in that sort of shared classical philosophical Ideenraum which characterizes all Catholic theology, key elements of Catholic teaching are going to look increasingly bizarre. For example, in the recent debate over same sex 'marriage', failure of even many Catholics to understand (in Aristotelian terms which have their analogues in Platonism) the concepts of a nature, embodied in a form, or of potentiality which is actualized, makes it very difficult to explain arguments against same sex 'marriage' which embody claims about the true purpose of marriage. (And those metaphysical points are in addition to the problems which arise from a failure to make clear the classical philosophical assumption that politics is about the promotion of flourishing rather than simply the creation of negative liberty.)

So we need a way of Catholics and others to grapple with the philosophical worldview on which revealed theology stands. (And that way has to be cheaper than (eg) the courses at Maryvale.) There is (to my knowledge) no one single book that even fully explains such a worldview, let alone tries to justify it. (And that of course is in part because philosophy can't as neatly be separated out into the what and the why: to philosophize is to engage critically with the views, not just to know what they are.) What books would I therefore recommend? My answer here is very much a work in progress: what I'm going to say is not right, but it's my best stab at the moment. (So any further suggestions gratefully received.)

Peter Kreeft's reading list won't do (however excellent it is): it's too long and wouldn't serve my main purpose (which is, roughly, to provide an introduction to the philosophical background of Catholic theology which explains primarily the what but enough of the why so that the what retains a plausibility which can be built on if you wish to pursue more detailed studies). There is, for example, not much point in grappling with the intricacies of Descartes and Mill when the absolutely key thing to know about them is that they are wrong and why.

Peter Kreeft: Socratic Logic. One to live with rather than to read through in one sitting.

Edward Feser: The Last Superstition. Polemical, but does make clear why the claim that Plato and Aristotle are still relevant isn't just an antiquarian fancy.

John Vella: Aristotle: A Guide for the Perplexed. Makes Aristotle sound like a neo-Thomist (which is fine for present purposes even if I think Vella oversystematizes the actual Aristotle). I have no idea why I can only find this on Italian Google books! The text is in English (and is still in print).

Leo Strauss: Natural Right and History.  I know Leo Strauss is supposed to be the Neo-Con devil incarnate whose followers eat babies and started the Iraq war. I'm not a Straussian, but this simply strikes me as a good, quick introduction to an approach in politics which is recognizably in keeping with classical models.

John A .Oesterle: Ethics: the introduction to Moral Science. Out of print -so I'm not totally happy about recommending this. But does give a short but clear account of moral philosophy from a Catholic perspective.


I've tried to cover analogues to a three volume traditional cursus philosophiae: typically, logic, metaphysics and ethics. For trying to bash sense into a hostile atheist, I'd try John Haldane's Atheism and Theism, just because Smart and Haldane model what a reasonable encounter between theism and atheism should look like. (If you just want to have fun and don't mind irritating your atheist, give them Feser's work above!)

Putting all that aside and coming at it from a completely different direction, I came across some discussions on Continuing Anglican websites about what a reading list in orthodox Anglican theology might look like. Both because there are some analogies between our purposes -ie how do individuals with limited resources get a basic grasp on orthodox religion- and because it begins to touch on a question that the Ordinariate will have to wrestle with (ie what is the Anglican intellectual patrimony that can be brought across the Tiber), I include some links below:

Anglican Continuum: See combox on this post for a debate about reading material.

I'd stress that these links aren't to Catholic sites: I'm only including them as a convenient list for some analogous thoughts on what an 'unofficial' education in orthodoxy might look like and how it might be achieved. (And for any Anglicans dropping by!)