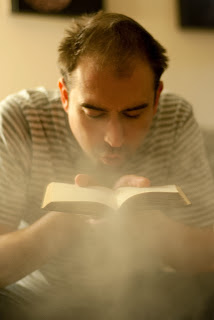 Of all the comments on Pope Francis' interview -well, OK, excluding Eccles' typically brilliant comic turn- Lee Faber's, in response to the Pope's talk about 'decadent textbooks', had me chuckling most:


Ouch! Even I, Scotist though I be, have spent many happy hours poring over Thomist manuals. I can only dream of such an education. [From The Smithy.]

Too right, bro'. I could probably claim a reasonable competence in both theology and philosophy in general, but I'm only a hobbyist when it comes to scholasticism. The thought of having had access to a thorough grounding in the discipline at a young age makes me go all tingly and regretful...


Anyway, as I mentioned in my own post, this remark of the Pope's sent me a pondering:

The church has experienced times of brilliance, like that of Thomas Aquinas. But the church has lived also times of decline in its ability to think. For example, we must not confuse the genius of Thomas Aquinas with the age of decadent Thomist commentaries. Unfortunately, I studied philosophy from textbooks that came from decadent or largely bankrupt Thomism. In thinking of the human being, therefore, the church should strive for genius and not for decadence.

Let's dig a little deeper. I'm currently reading Phillips' Modern Thomistic Philosophy (internet archive version of vol. 1, here). It's perhaps not typical of other manuals, particularly those that the future Father Jorge would have studied, but neither is it so far off that it's unusable as a concrete example. Its atypicality is that it is written in English rather than Latin and, unlike many earlier manuals, isn't laid out in an almost geometrical structure (for comparison, see Jouin's Compendium logicae et metaphysicae). It's therefore slightly more like a modern textbook than earlier manuals and, moreover, received the accolade of being included in the Thoemmes reprints of Modern Writings on Thomism in English, edited by John Haldane -so it's unlikely to be a complete duffer philosophically. (It was originally published in 1934.)

OK, that said, what's wrong with it? Well, looking at a schismatic ultra-Catholic seminary programme (which I take to be similar to a pre-Vatican II programme), the prospective Father Jorge would have been flung immediately into the intricacies of philosophy in the form of logic and cosmology. The Phillips' manual (unlike Jouin's) doesn't include logic, but it does start with cosmology. Now I'm coming at this with a fair philosophical background, but it still doesn't make it an easy read. It suffers from two main problems. Firstly, difficult issues are not explained at sufficient length for them to be fully comprehensible. Secondly, it is very rarely made clear why the various points that are being raised are important. For example, in a discussion of infinity, I could imagine that students might ultimately find it useful both in dealing with some aspects of arguments for the existence of God, or for dealing with modern science. But there is absolutely no hint of this: instead the student is left ploughing through dense material without much of a clue about where they'll end up and why.

Now I can imagine at least two possible replies here. Firstly, there is the 'Platonic' reply. By learning to apply themselves to the abstract and theoretical without the cheap allure of immediate usefulness, the student's mind is prepared for contemplation of divine things. (A bit of this still goes on in academic philosophy. I harbour a (doubtless unworthy) suspicion that, during my time as an undergraduate, the rather large first year class in philosophy was subjected to a deliberately dry curriculum as a pons asinorum: survive it, and you were allowed to enjoy the subject.) Secondly, there is the observation that these are texts which are taught: what is lacking in them is lacking because it was to be provided by the teaching of the lecturer.

Both of these points doubtless have some force. Students do have to learn to knuckle under to a discipline. But for those students for the priesthood who were not particularly attracted by hard abstract theological thought but simply wanted (eg) to serve their fellow man, it does seem an unnecessarily hard apprenticeship. Moreover, even if lecturers supplemented the texts, it seems reasonably clear from recollections such as the Pope's that this wasn't always done well; and that, moreover, that there is only so much such a supplement can do: cosmology is still cosmology.

I'm still mulling all this over. I have no doubt at all that the abandonment of an attempt to articulate Catholic philosophy and theology in a systematic way at least as a foundation for the life of a priest, religious and of an informed laity is the most serious lack in the modern Church, far, far more serious than any problems with the liturgy. Although the Catechism goes a long way to help here, it remains an essentially fideistic document: it does not give an explicit account of the philosophical, reasonable foundations of Catholicism as an ancilla theologiae. The obvious answer here is a return to something like these manuals, but that solution comes up against a continual insistence by many who encountered them as students of the deadening effects of their use, quite apart from the manifest failings I've mentioned above. (And it's hard to imagine present generations, even less well prepared for a systematic slog by modern education, finding the experience much better.) There's also the (not unrelated) problem of apologetics: if you are schooled in a system that has very little contact with the intellectual life of the culture around you, you may be able to salami slice their errors with complete accuracy, but have absolutely no chance of explaining these errors in a way that will get a hearing. In the end, I think this all boils down to my having a diagnosis (a poor standard of (religious) education among Catholics) but not much sense of what a practicable solution looks like. What, for example, should a Catholic, intelligent and well educated in secular terms, regard as a bare minimum of Catholic learning, and how should he or she go about getting it?

The Pope talks about the big picture and unconditional love, and I pick up on the need for nineteenth century neo-Scholastic manuals. Might it be suggested I'm rather missing the point? Well, in part, I'd plead guilty to that. I'm much happier fighting an intellectual culture war than actually loving people. That's why, whatever anyone else might say about the Pope, I'm happy he's there: I need him to remind me and challenge me in my own characteristic weaknesses. But beyond that, you can't take what is essentially a sermon and turn it into a rule book. Genuinely caring for people involves nasty technical things like building sewers and getting speed limits right. Equally, it involves getting education right as well as training for future leaders, lay and clerical. Working out what love requires of us involves a change of heart, but also hard, difficult thought and self-discipline. Making sure that you keep a broken and contrite heart does not mean keeping a sloppy mind. But it does mean going back to check regularly that the sharpness of your wits isn't shredding souls as well as errors.