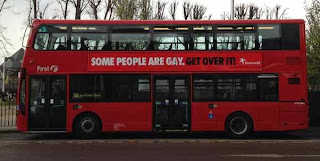 One of the nice things about blogging is being able to articulate the serendipity of everyday encounters. So, here I am, currently working my way through a cover to cover reading of Foucault's History of Sexuality when I happen to notice one of those Stonewall bus ads (above) and then, fired up to write something about that, happen to read an excellent article by Tina Beattie on Femen and commodification of the body when I turn on the computer this morning. And I suppose you can add into that serendipitous soup, Pope Francis and his emphasis on the big picture.

I suspect that the 'commonsense' view of Catholicism's attitude to homosexuality is something like this. Throughout history, human beings have delighted in picking on minority groups and hurting them. Progress is a matter of getting rid of this oppression. We've done it/are doing it with racial minorities and women. Now we are doing it with gay people. The Catholics' reaction to this is simply the last gasp of an oppressive regime. It's the sort of thing that happens when an oppressive authority is challenged. Ordinary Catholics will wise up eventually even if those who have been exercising their authority in hurting gay people will probably go on lamenting their lost power for a while.

I don't expect to be able to remove such a worldview in a few lines: it is, after all, a diagnosis from an outsider point of view of a (putatively) sick institution/deluded members. You'd expect those deluded members to protest and I'm going to. But this is what -in broad terms anyway- it looks like from an alternative insider point of view. (And put roughly, it is that what and whom and how you desire matters.)

1) For a start, at least in Scotland, the Stonewall campaign is associating an opposition to same sex 'marriage' with homophobia. Again, I don't expect anyone to be convinced just by my saying it, but I'll say it nonetheless: opposition to a profound change in the procreative function of an institution that has been regularly held by the greatest minds of the West to be at the heart of society is not unreasonable and it is not homophobic.

2) But putting that aside, let's turn to the idea that we should just 'get over it'. One aspect of the 'commonsense' view of Catholicism is that it is about bashing other people: essentially, Catholic morality is about telling other people what to do. From the 'insider' point of view, however, Catholic morality rests on care: care for the welfare of self and care for the welfare of others. That this care for good is then translated into rules and orders is of secondary importance (and results from belief in a God who legislates). The key feature is care for what is good for us, both me and you.

3) But of course, it will be said that 'get over it' isn't a comment on the issue of care for self and others as a principle, but on the substance of what that care involves according to Catholicism. In short, 'get over it' simply means, 'stop imposing your stupid ideas about what is really good for people': it's a pragmatic suggestion to keep the terminally deluded (ie Catholics) from bothering others, not a principled comment that the sensible (ie Stonewall)  should also stop getting involved.

Catholic ideas on the good in sexuality in many ways have much more connection with pre-modern approaches than modern understandings. Foucault traces much of the modern understanding of sex to confession: the need to articulate a truth that has been repressed. (I'll ignore for now Foucault's claim that modern sexual understanding is as a consequence the child of mediaeval Catholicism and its development of auricular confession.) Such an approach can be seen in almost all the current 'commonsense' narrative on sex, homosexual or heterosexual: they (Church, parents etc) stopped us beings ourselves; now we can be truly what we are.

The Greek understanding was different. Unlike the modern schema which is about articulating the truth of our desire (ie what we really want), the Greeks

...believed that the same desire attached to anything that was desirable -boy or girl- subject to the condition that the appetite was nobler that inclined toward what was more beautiful and more honorable; but they also thought that this desire called for a particular mode of behaviour when it made a place for itself in a relationship between two male individuals. The Greeks could not imagine that a man might need a different nature -an 'other' nature- in order to love a man; but they were inclined to think that the pleasures one enjoyed in such a relationship ought to be given an ethical form different from the one that was required when it came to loving a woman. In this sort of relation, the pleasures did not reveal an alien nature in the person who experienced them; but their use demanded a special stylistics. (The Use of Pleasure, p192 (ch1, 'Erotics) part 4).)

So there are two levels here: what (whom) one loves; and what one does within that love. Most of the 'commonsense' view of Catholicism focuses on the second aspect: Catholics are obsessed with the mechanics of sex. Now, certainly, all the well known stuff about Catholic teaching in this area does indeed exist: no contraception, no genital activity between the unmarried etc. But it emerges from the first level: what and whom we love. And here, unlike the Greeks, it matters that we love women*.

OK. But the objection comes: of course men should love women, But that doesn't mean that we should love them physically, does it? And that brings us to Beattie's article.

4) I'm not going to pretend that the images of naked or near naked women that Beattie refers to in her article don't attract me in some sense: they do. But nor do they attract me in a straightforward, uncomplicated way. The images in the adverts also repel: Beattie talks about 'the commodified and eroticized' images of the ads, and that's roughly it. They're being used, I'm being used and I can see the attractions of flesh and money but I'm (rightly) not easy with those attractions. The key point here is that (in some sense) I am physically attracted to those images but in some sense I am physically repelled by them: what it is to be physically attracted is not a simple matter of mechanics, but a subtle interplay of meanings and representations of good and bad.

Beattie's article is, in many ways, a well trodden path: there is a lot of feminist writing on representations of women and their bodies and the male gaze. Equally, there is a lot of Catholic writing on loving women: I'm also chugging through Dante's Divine Comedy just now, and Beatrice is about to appear: the physical attraction of Courtly Love is not distinct from the quest for the divine. From one point of view, Catholicism projects theological concerns onto the physical; from another point of view, Catholicism just recognizes the way that the attractiveness of the divine permeates the attractiveness of creation (including women).

The main point is this: physical attraction -whether from a feminist point of view or a Catholic one- is not uncomplicated and is certainly not uncomplicatedly good. To see and desire appropriately is part of what it is to be a flourishing human being: that the Greeks too recognized. But, unlike the Greeks, Catholicism puts a heavy emphasis on the desirability of women, and, also, like feminism, on how that desire should work: on what is the good male gaze.

5) Where does that leave someone who doesn't find women physically attractive? Well, certainly dysfunctional in some way. But in what way? And then there follows a complicated, very difficult process of discernment -which is just as difficult (or more difficult or less difficult -who knows? how would you measure it?) as that of someone who is attracted to women- of how one is attracted and what one is attracted to. (Is it better to be gay than it is to be someone who is attracted to commodified images of women? Again, how could you measure this?) From the Catholic point of view, disorder in our pursuit of our natural end (roughly, earthly happiness) is only to be expected and perhaps the main thing is to worry about our supernatural end (again, roughly, heaven). And then the vocabulary of gay/straight is entirely unhelpful: a straight man staring at Beattie's images and thinking, 'Whoarr! What a pair on her!' is in one sort of trouble; a man staring at Michelangelo's David and thinking that he looks like a nice lad to settle down with is in another.

What feminism and Catholicism (and the Greeks) share is a concern for what we desire and how we desire other people. Catholicism certainly teaches that it matters whether or not we (men) desire women and how we desire them. Frankly, I can't see how some such purification of our gaze is avoidable: failing to think about such issues simply avoids important questions about (eg) the imagery of Femen that Beattie is surely right to consider. Regarding sexuality purely as about the liberation of our real desire is as poor a guide to life as regarding Femen as simply about liberating women from patriarchy. It really, really is all much more complicated than that.

*I hope readers will forgive my concentrating on the male 'we': it's simply that I'm male and it makes it rather easier to think about the topic from a male perspective. Similar things, mutatis mutandis, could be said from a female perspective.