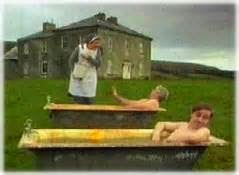 
Related to last night's documentary on the Japanese not having sex (i-Player, here, presumably for seven days), there's been a spate of articles on how (in particular) Japanese men have given up wanting sex.

Well, you'd have thought that, as a Catholic, I'd have been all in favour of that. (Down with that sort of thing, and all that.) But of course that's quite wrong: Catholics are all in favour of sex as part of our natural end (earthly happiness or flourishing). Only where it gets in the way of our supernatural end -heaven and the eternal contemplation of God- is there a reason for avoiding it.

The modern conceptualization of sexual desire is simply that: sexual desire. So I am gay or straight based on what I like, not what I do. And of course the satisfaction of that desire in a world of technology is often more effectively done through virtual girlfriends rather than real ones (who tend to be highly disruptive, having opinions of their own and all that). The Catholic (Aristotelian) conception is based on the telos (end or goal) of human beings as involving the creation of a household.

The difference between the two conceptions of success couldn't be greater. Flourishing in the modern conception is simply the satisfaction of sexual desire -and real people may not be very good at fulfilling someone else's desires. (So off to the iPad.) On the other hand, flourishing in the achievement of the natural end according to natural law is about the creation of an institution, not the creation of a feeling. Someone who has not developed the virtues required to create and maintain a household (ie having the character suitable for living with someone of the opposite sex and bringing up children) has failed: imagined girlfriends just don't count as success (and nor does just being able to tumble into bed with someone else).

That of course doesn't mean that someone who, through no fault of his or her own, can't have children has morally failed, any more than someone who gets struck by lightning on the way to Mass has morally failed. Accidents happen and they are that: accidents. How we deal with them says something about our character. That they happen says nothing. Nor does it mean that religious who become celibate have failed: they have merely sacrificed aspects of their natural end in order to concentrate on the more important supernatural end.

But the simple idea, at the heart of natural law, that success in living isn't just about satisfying feelings, but rather about fulfilling our nature, has become so strange to modern ears that a sexual taxonomy based on desire (heterosexual/homosexual) has crowded out and obscured a more profound categorization into those who can sustain a household and marriage (and I suppose one must add here -though God help us- 'with someone of the opposite sex') and those who can't. Virtual girlfriends are merely one of the odder symptoms of that.