Links between paedophilia and gay rights 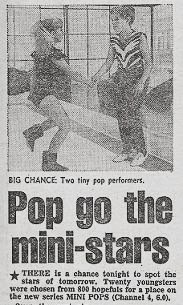 Channel 4's Mini Pops: we had to wait ten years for permission from radical feminists to vomit

I have read and listened with frustration to the extraordinary ahistorical non-debate about the National Council for Civil Liberties (NCCL) and Paedophile Information Exchange (PIE) in the 1970s. Let me be clear from the outset that I have never supported PIE, being one among many radical feminists who were beginning to recognise child sexual abuse in the 1970s. But we knew so little then about its scale, and were debating sexologists and others who argued it was not necessarily harmful; this was not just a discourse of abusers, it was articulated in the Kinsey Reports and by a range of respected academics.

[From The Guardian. Professor Liz Kelly is co-chair of the UK-based End Violence Against Women Coalition and is director of the Child & Woman Abuse Studies Unit at London Metropolitan University.]

Kelly argues -in essence- that we shouldn't blame Harman because a) we didn't know about paedophilia until well into the eighties and b) it was feminists like Harman wot stopped it.

An immediate thought here is whether this 'didn't know, guv' works for priest abusers as well as the bishops who let them carry on? Can we just ignore all abuse in the Catholic Church until the late eighties because radical feminists hadn't finished their debate with sociologists until then?

But putting this aside, this is not the history as others have recorded it. Veronique Mottier (not exactly a right wing Catholic loon as her CV shows) says this (in Sexuality, p107):

Gay rights' organizations' alliances with paedophile activism around the age of consent issue, or more generally on the grounds of solidarity with other sexual minorities, have melted away since the early 1980s. In large part this was the result of campaigns from the Christian Right such as the US conservative activist Anita Bryant's self-proclaimed 'crusade' against 'the threat of homosexual recruitment of our children', entitled Save Our Children, which portrayed all gays -and gay men in particular -as potential child molesters and triggered the start of organized opposition to gay rights organizations in the US from the late 1970s. While the Dutch gay rights organization COC had declared in the early 1970s that gay liberation would never be complete without the sexual liberation of children and paedophiles, by the mid-1990s the great majority of gay rights organizations had distanced themselves explicitly from paedophile advocacy...

The NCCL/PIE issue is highlighting two things. First, there is a 1984-like attempt to re-write recent history or at least to forget it. Gay rights/paedophile rights/sexual rights were all bound up in a libertarian free for all, where the sole narrative was liberation from the Judaeo-Christian taboos on sex. Sex was good. Sex had been repressed. The solution was to get rid of the repression. Consent wasn't a particularly important aspect of that sexual revolution: freedom from guilt was. And if young women (or boys) needed a little shove in order to get with the revolution, then there were plenty of people (usually men) who were willing to do that.

Second, at a deeper level, we have here a slice -a stratum- of the archaeology of the construction of normal sex. What it is to be sexual -heterosexual, homosexual, normal etc etc- has changed under our very eyes. We pretend that the lines between the normal heterosexual who is only attracted to mature women and the pervert who is attracted to girls are given by nature as brute fact (rather than nature as moral goal): if we can just unrepress ourselves, the normal will be fine. (And we conveniently forget Pliny who married a fourteen year old when he was nearly forty or Victorian obsessions with children.) And we pretend that the normal, the good male homosexual is only interested in mature men and forget that, only a few years ago, the sexual initiation of children was being publicly advocated by gay rights' groups.

In France, various public petitions of the late 1970s called on Parliament to abolish age of consent laws; in particular, a 1977 petition calling for the decriminalization of all consenting relations between adults and minors was signed by prominent public intellectuals including Jean-Paul Sartre, Simone de Beauvoir, Michel Foucault, Jacques Derrida, Roland Barthes, and France's most prominent child psychoanalyst Francoise Dolto. Paedophile advocacy groups thus operated in a context in which cultural ideas about children's sexuality were being redefined more generally...

That narrative of release from repression has been replaced by one of consent. (See my previous post.) Frankly, this is as flimsy as the earlier attempt at changing traditional sexual mores: consent is as essentially inadequate a basis for a morality as release, and it's one that (unlike the earlier one of release) doesn't make clear why we should indulge in sex. (Hence, perhaps, the tendency of the modern young not to.)

One of the few people clearly to come out of this well is Roger Scruton:

In a Times piece in September 1983 he wrote: "Paedophiles must be prevented from 'coming out'. Every attempt to display their vice as a legitimate 'alternative' to conventional morality must be, not refuted, but silenced."

It is clearly part of virtue to know when something is outrageous and to react immediately and with incredulity at its advocacy. Finding it immediately and incontestably disgusting is the appropriate reaction to the desire to have sex with children: conservatives get that and progressives don't. If -as the libertarians proclaim- that disgust is simply the result of repressing the temptations that other societies encourage, I would like to say so much the better for us and so much the worse for other societies. But, of course, I can't. I had to wait for Liz Kelly, radical feminists and distinguished academics to let me know their views on that. Only right wing nutters like Scruton and Anita Bryant went with their guts and got it right first time.
Posted by Lazarus at 09:26